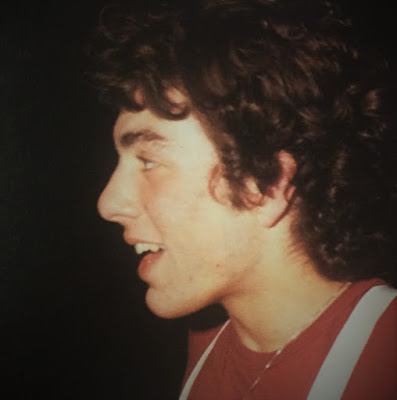 "I try to excite them. I try to perform, to make myself different, to make them cheer . . . I'll do anything to make them pull for me." - Dennis Coi

The son of Pietro and Marilyn Coi, Dennis John Coi was born August 11, 1961 in North Vancouver, British Columbia. He started skating at the age of ten under coach Edi Rada at the North Shore Winter Club alongside Olympic Silver Medallist and World Champion Karen Magnussen. His earliest success actually came in pairs skating, when he won the bronze medal in novice pairs with Julie Mutcher at the 1974 Canadian Championships in Moncton, New Brunswick. However, the young skater showed immense promise as a singles skater, passing his Gold tests in figure and free skating at the age of fifteen.

Although certainly a talented jumper, Dennis' style on the ice was in many ways like a cross between an early Toller Cranston and Ron Shaver. He wasn't your typical men's skater of the era by any means. He interpreted the music beautifully, took risks choreographically and had a killer layback spin. Leaving Rada after passing his gold tests to "explore new ideas in skating", Dennis worked with Brian Power, Mrs. Ellen Burka and Linda Brauckmann. Under Mrs. Burka's tutelage, obvious comparisons were made between the young artistic skater and Cranston. Dennis dismissed them, saying, "I suppose it is inevitable. After all, both of us have skated with Mrs. Burka, but the way I skate is the way I want to. I am not copying anybody else." 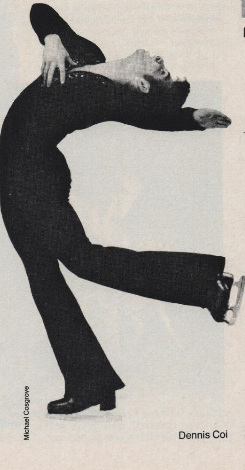 Despite a ninth place finish in the junior men's event at the 1977 Canadian Championships, it didn't take Dennis long to make his mark. At sixteen, he returned to the Canadian Championships in 1978 and bounded back from a fourth place finish in the figures to win the free skate and junior men's title ahead of Daniel Beland, Brian Orser and Kevin Parker. In the February 3, 1978 issue of "The Globe And Mail", he confidently remarked, "It may be a surprise to the people, but not to me." His win earned him a spot to the 1978 Junior World Championships in Megève, France. Beating Vladimir Kotin of the Soviet Union (the leader after the compulsory figures) in both the short program and free skate, Coi became World Junior Champion and defeated not only Vladimir Kotin but a pair of young Brian's - Boitano and Orser - in doing so. The same year, he won the bronze medal at the Ennia Challenge Cup in Holland behind American Scott Cramer and Frenchman Jean-Christophe Simond. 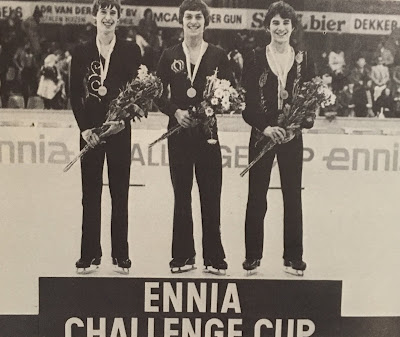 Although Dennis was named British Columbia's junior athlete of the year in 1979, when he moved up to the senior ranks he was unable to keep up with the likes of Brian Pockar, Vern Taylor, Gary Beacom and Gordon Forbes. He finished seventh in figures and remained there at the 1979 Canadian Championships. In The Hague that fall at the Ennia Challenge Cup, he narrowly lost the bronze medal to Robert Wagenhoffer in a five/four split. He wasn't happy, saying, "I landed five faultless triples. I showed a variety of styles and spins. Wagenhoffer landed a triple on two feet, fell once, and almost fell a second time. I strongly feel that I deserved to be higher. I should have been third or second." Progress took time. At the 1981 Canadian Championships he was seventh, at both Grand Prix St. Gervais and the Nebelhorn Trophy in Oberstdorf, West Germany that fall he was fourth. However, his tides began to turn in the fall of 1982 with a strong performance - and a win - at the Western Divisionals in Saskatoon despite a bone fracture suffered when practicing the triple Lutz.


At age twenty, Dennis entered the 1982 Canadian Championships in Brandon, Manitoba injured but with a renewed confidence. After finishing fifth in figures behind Pockar, Beacom, Orser and Forbes, he rebounded with one of only two clean skates of the night in the short program that year. His only near mistake was almost running into the boards after landing a required double Salchow. With an equally impressive free skate, he earned the bronze medal. In the February 1, 1982 issue of "The Globe And Mail", he declared, "I feel great. I'm going to celebrate and take some time off. I think a lot of it has to do with the fact that the CFSA sent me to some international competitions. I started feeling like a part of skating, and I did well over there. My confidence started to build up." 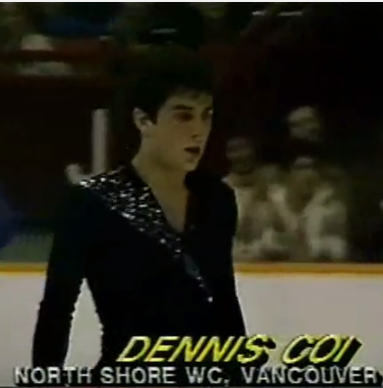 Unfortunately, that autumn Dennis spiked his foot with his blade while again attempting a triple Lutz in practice. The injury came just three weeks before he was to compete at Skate America. Doctors first told him nothing was broken. In a September 30, 1982 interview in "The Globe And Mail", he explained, "I took two weeks off to let it heal. Then when I started skating again last week, it really hurt, so I went back for X-rays and they found I had fractured a bone in my foot. I think the reason they may not have seen anything at first was because the fracture was right at the joint of the bone leading to the middle toe. When I started skating again, the bone moved over... I'm trying to stay in shape by riding a stationary bicycle. But it's boring as hell... I had an incredible summer. I spent two weeks [skating in Washington] and seven weeks in Los Angeles. It was just a great atmosphere. I was skating with top U.S. competitors [Tiffany Chin, Mark Cockerell and Bobby Beauchamp] and top professionals [Fumio Igarashi and Linda Fratianne]. I really had improved a lot, then this all happened. There was no way that I was going to get back to the point I was at the end of the summer." He withdrew and took the fall off to recoup. 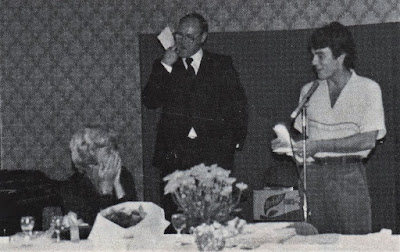 At the 1983 Canadian Championships, a seventh place finish in figures left Dennis in the familiar position of having to move up in the short program but a popped double loop kept him there. He finished fifth overall, well back of medallists Brian Orser, Gary Beacom and Gordon Forbes. "Sometimes I think it's a crazy sport," he told reporters. "But it is a way of expressing myself that is not possible any other way."

Given the chance to redeem himself in international competition that fall, Dennis finished a disappointing tenth out of eleven competitors at Skate Canada. At Moscow Skate, Dennis and Gary Beacom fell asleep at the hotel and almost missed the figures. Perhaps still rubbing the sleep out of his eyes, he finished in sixth at the end of the day, well back of winner Vladimir Kotin, a skater who he'd previously defeated when he won his World Junior title. The artistically inclined skater endearingly known as "the smaller Toller" in skating circles had one last chance for redemption and at the 1984 Canadian Championships in Regina, Saskatchewan, but he let it pass him by. Although he did beat a young Lloyd Eisler, he finished just off the podium in fourth behind Orser, Beacom and Forbes and missed his last chance to make an Olympic or World team. His amateur career may have ended without fanfare... but he was a skater that other skaters watched.

Sadly, like Shaun McGill and Paul McGrath whose stories previously explored on the blog, Dennis  died far too young of complications of HIV/AIDS, on September 1, 1987 at twenty six years of age. His story was featured in "The Calgary Herald" on December 13, 1992: "Coi was [a] humorous man, a flamboyant skater... [whose] pranks are legendary in skating. When his national teammates did poorly in a competition in Europe, he carved medals out of bread and hung them around their necks. Coi refused to change his clown's outlook when death faced him... When told he had AIDS, Coi dressed up in a fluorescent spandex outfit and rode around Vancouver on a red motor scooter... Coi died in his mother's arms while doing one of his favourite things - playing bingo. 'He missed a bingo by one number and said 'Oh [shit].' Those were two of the last words he spoke before he went into an epileptic seizure.'"

The circumstances of Dennis' death helped reshape his mother's perspective. Marilyn Coi said, "I had no idea Dennis was gay until he told me he had AIDS. I was angry for a while, about who he got [the virus] from, but now I don't want to know. It could have been anybody. I've learned to accept gays as human beings." The condolences poured in from a who's who of the Canadian skating world. Mrs. Ellen Burka recalled Dennis' final television interview, taped while he was in the hospital. "He was still performing to the end, with his hair dyed red," she said. Osborne Colson remarked, "'He was a ray of sunshine. He would smile all through his program." 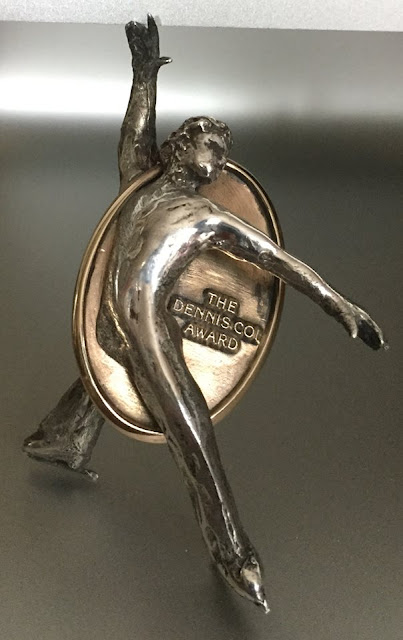 After his death, the CFSA created the Dennis Coi Award, which was annually given at the Canadian Championships for a time to a skater who "keeps skating and life in perspective". Lloyd Eisler and Osborne Colson were both recipients. I think it goes without saying that the world has become increasingly more liberal in its thinking over the years. You don't hear as many coming out horror stories of parents disowning their LGBTQ+ children and with vast advances in medicine and science, HIV isn't the death sentence it once was. That's what makes stories like Dennis' even harder to swallow. 'The Smaller Toller' could still be out there and sadly, his story remains but a footnote in skating history.

Skate Guard is a blog dedicated to preserving the rich, colourful and fascinating history of figure skating and archives hundreds of compelling features and interviews in a searchable format for readers worldwide. Though there never has been nor will there be a charge for access to these resources, you taking the time to 'like' on the blog's Facebook page at http://www.facebook.com/SkateGuard would be so very much appreciated. Already 'liking'? Consider sharing this feature for others via social media. It would make all the difference in the blog reaching a wider audience. Have a question or comment regarding anything you have read here or have a suggestion for a topic related to figure skating history you would like to see covered? I'd love to hear from you! Learn the many ways you can reach out at http://skateguard1.blogspot.ca/p/contact.html.
Posted by Skate Guard Blog at July 22, 2017
Email ThisBlogThis!Share to TwitterShare to FacebookShare to Pinterest
Newer Post Older Post Home