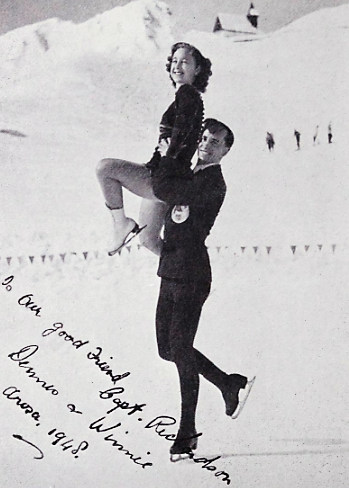 Born February 1, 1923 and March 3, 1925 in the seaside resort town on Brighton, England, Dennis Alfred Silverthorne and Winifred 'Winnie' Ellen Silverthorne were the children of fishmongers. They learned to skate at the S.S. Brighton on rink atop a filled-in swimming pool in the mid-thirties and by the ages of fourteen and sixteen, Dennis was Great Britain's junior men's champion and Winnie the junior women's silver medallist. The careers of the two promising skaters from Sussex were cut short when World War II broke out. 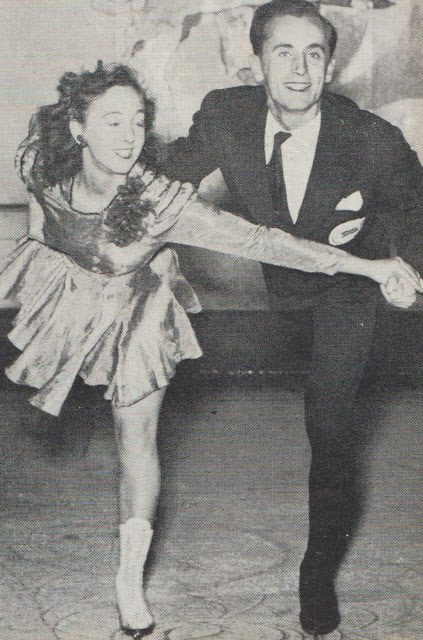 Photo courtesy "Skating World" magazine
Though underage, Dennis was recruited to join the Royal Air Force. He was first sent to Dunnville, Ontario where he trained at a pilot school alongside 1939 World Silver Medallist Freddie Tomlins. Then, he flew a four-engined Avro Lancaster over German occupied areas in Continental Europe. Reporter Tom Hawthorn noted in 2004, "The only close scrape he discussed after the War involved a jilted girlfriend. Her responsibility was to pack the aircrews' parachutes and, soon after their romance soured, she handed Mr. Silverthorne his backpack with what he took to be a peculiar smile. He was grateful he did not have to use the parachute on that mission." Meanwhile at home in England, Winnie joined the Women's Royal Naval Service and acted as a scientific instrument inspector. 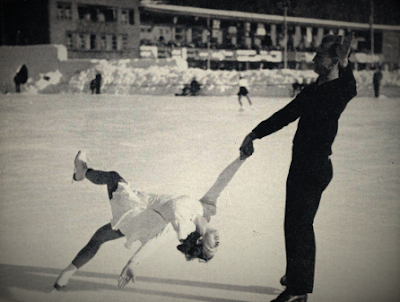 The siblings reunited both off and on the ice after the War, studying under Arnold Gerschwiler and Armand Perren and forging a partnership as a pairs team. In May and December of 1946, they held off challenges from Bob Hudson and Jean Higson and Tony Holles and Joyce Coates to win two back-to-back British pairs titles. At the 1947 European Figure Skating Championships in Davos they won the silver medal behind Micheline Lannoy and Pierre Baugniet of Belgium. So impressive were they in their big international debut that the Czechoslovakian judge had them in first place. At the subsequent World Championships in Stockholm, they barely missed the podium, finishing in fourth behind another Belgian pair, Suzanne Diskeuve and Edmond Verbustel. Judges from France, Great Britain and the United States had them in the top three. They capped off their brief competitive career with top six finishes at both the 1948 Olympic Games and World Championships in Switzerland. 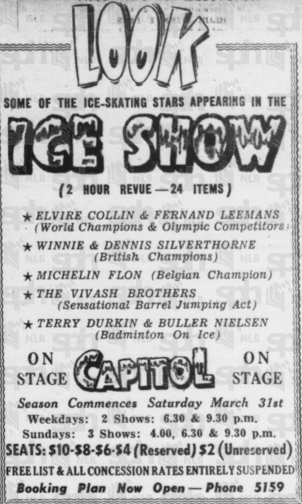 Turning professional in July of 1948, Winnie and Dennis appeared in Tom Arnold's "Stars On Ice" at the King's Theatre alongside Marilyn Telfer, Valerie Morn and Adele Inge, supplementing their income from the ice pantomime by teaching skating in Brighton. After briefly touring with Arnold's international company in India, Dennis married Belgian Champion Micheline Flon in 1950. Winnie and the newyleds boarded the Cunard liner RMS Franconia in December of 1951 and headed to New York City with plans of coaching in Canada. 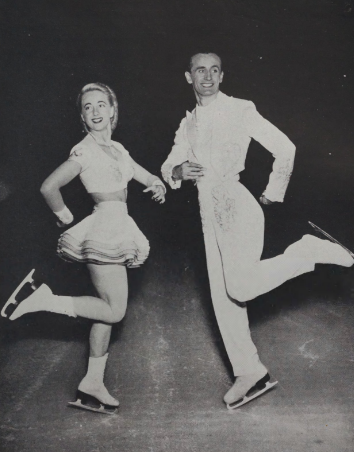 Dennis settled in Schumacher, opening the Silverthorne Skating School in St. Thomas in 1959. Although he helped launch two skating clubs in London, Ontario in the seventies (Ilderton and Forest City) his biggest claim to fame was the fact he coached Donald McPherson from the time he was a young boy until he won gold medals at the Canadian, North American and World Championships. After remarrying to a skating judge named Patricia Herrick, he also coached in Cleveland, Ohio for a time. Winnie was quite the accomplished coach in her own right. Settling in Alberta, she coached first at the Glencoe Club and later at the Calgary Winter Club. Like Dennis' star McPherson, Winnie's prize pupil, Brian Pockar, was also a Canadian Champion and a World Medallist. In 1979, Pockar said of his long time coach, "I've chosen Winnie and put my career in her hands. She takes it seriously and I trust her."

Winnie passed away in Calgary on March 7, 1998 at the age of seventy three and is remembered to this day for her dedication to working with not just champions, but skaters of all levels. Dennis left this world in London, Ontario at age of eighty on January 2, 2004 after being diagnosed with cancer of the esophagus. In his "London Free Press" obituary from January 2004, Lianne Anderson (then president of the Ilderton Skating Club) recalled, "He was a driving force in the sport. You don't find many people who commit that much of their life to anything,.. He was always a gentleman, always properly dressed and perfectly mannered. Figure skating is a business - a career - but he was always there for the kids." Dennis was inducted posthumously into Skate Canada's Hall Of Fame in 2006 and Winnie is remembered through the Alberta/Northwest Territories/Nunavut section of Skate Canada's annual Winnie Silverthorne Award presented to skaters who give outstanding performances in competition.

Skate Guard is a blog dedicated to preserving the rich, colourful and fascinating history of figure skating and archives hundreds of compelling features and interviews in a searchable format for readers worldwide. Though there never has been nor will there be a charge for access to these resources, you taking the time to 'like' on the blog's Facebook page at http://www.facebook.com/SkateGuard would be so very much appreciated. Already 'liking'? Consider sharing this feature for others via social media. It would make all the difference in the blog reaching a wider audience. Have a question or comment regarding anything you have read here or have a suggestion for a topic related to figure skating history you would like to see covered? I'd love to hear from you! Learn the many ways you can reach out at http://skateguard1.blogspot.ca/p/contact.html.
Posted by Skate Guard Blog at August 01, 2017
Email ThisBlogThis!Share to TwitterShare to FacebookShare to Pinterest
Newer Post Older Post Home
"As a rule an author has one or two popular ways of contrasting the past with the present. He can treat the past as lying in comparative doleful ignorance, or he can explain that the past was infinitely superior to the day we live in. Of course, either method is the popular journalism of the moment, and in reality there is no sharp contrast, but a gradual transition which leads the past into the present." - Joel B. Liberman, Skating Club Of New York