Double Threes Down Under: Australian Skating Stars Of The Thirties

The thirties was a decade when many great champions graced the indoor and outdoor arenas of the world, dazzling audiences with high flying Axels and dizzying flat foot spins. Sonja Henie, Karl Schäfer, Cecilia Colledge, Megan Taylor, Maxi Herber and Ernst Baier... these are all skaters whose stories even those with the most elementary knowledge of figure skating history are no doubt familiar with. While Europeans dominated the major ISU Championships, a host of skaters from 'down under' were busy creating their own stories in the rinks of Sydney, Melbourne and Adelaide. Today, we'll meet three fascinating stars of Australian figure skating who reached the apex of their successes in the years preceding World War II. 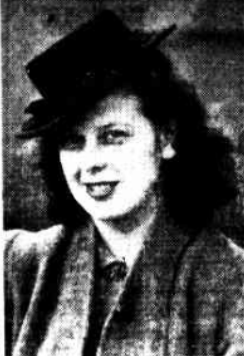 Born in 1916, June Weedon hailed from Bowral, a large, historic town in the Northern Highlands of New South Wales. As a young woman, she travelled extensively with her mother, visiting Colombo, Malta, Austria, Germany and Great Britain. It was in 1936 that she first learned to skate at the rink in Streatham, England, managed by Dunbar Poole, who for many years managed the Sydney Glaciarium.

Though the only Australian skater at the Streatham Rink at the time of her visit, the experience of learning alongside skaters from twenty one other countries was extremely beneficial. Only three years later, June claimed the Australian senior women's title and skated in an exhibition at the Sydney Glaciarium alongside World Champion Felix Kaspar. When World War II broke out later that year, her competitive skating career abruptly came to an end when the Australian Championships were cancelled for the duration of the War. In June of 1941, June married Ian McDonald at the Sydney Church of England Grammar School. One of her attendants was fellow skater Brenda Bradshaw. The couple settled in North Sydney. She passed away on New Year's Eve, 1976 in Wagga Wagga, New South Wales at the age of sixty. 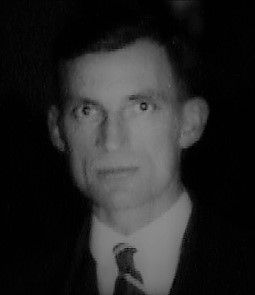 Born February 19, 1898 in the Melbourne suburb of Fitzroy North, Frank Joseph Mercovich wasn't exactly your typical figure skating champion. In his early twenties, he played Australian rules football with the Carlton 'Blues' Football Club. It wasn't until nearly a decade after he stopped scoring goals on the field that he began seriously devoting the bulk of his time to a second sport - figure skating.

One of the Melbourne Glaciarium's most esteemed members in the early thirties, Frank passed his First Class test and began teaching alongside his future wife, World Professional Champion Joyce Macbeth. Stronger at figures than free skating, he claimed the Australian senior men's title in 1935 and 1937 and was a repeat winner of the Victorian senior men's title as well. He also served three terms as the Secretary of the National Ice Skating Association of Australia, spanning the years 1931 to 1949. He passed away on October 12, 1967 at the age of sixty nine, devoting much of his life to sport. 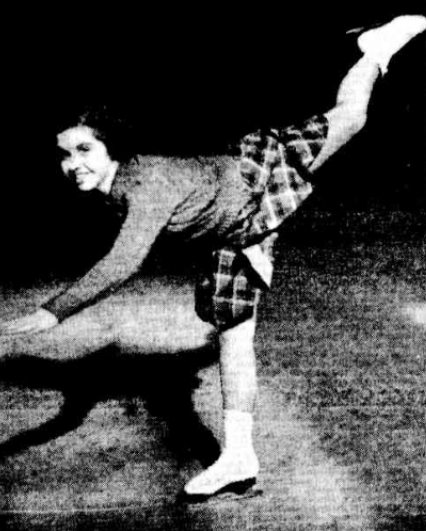 The daughter of Frederick and Marinda (Searson) Cornwell, Betty Cornwell was born in 1922. Along with her brothers Jack and Alfred, she grew up in the Melbourne suburb of Essendon. She attended Merton Hall, the senior school of Melbourne Girls' Grammar until she was fourteen, when she dropped out to pursue her only passion full-time - skating at the Melbourne Glaciariume. She'd started skating when she was six and idolized Sonja Henie. Pat Weetman described her performance in a 1936 carnival at the Melbourne Glaciarium as "utterly lovely". 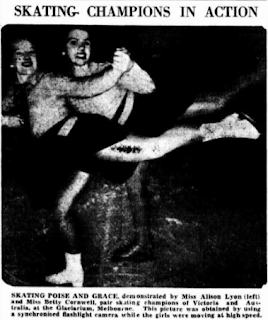 That very same year, she claimed the Victorian and Australian senior women's titles for the first time. She defended her titles the next two years, skating against 'a standard' the second time she won the Australian title as she was the only competitor. 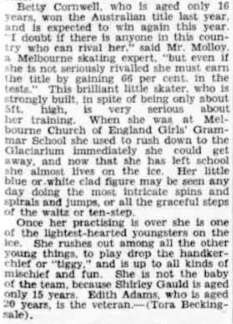 When asked about her achievements in an interview that appeared in "The Sydney Morning Herald" on July 19, 1937, Betty laughed, "People tell me it's very clever of me but my two brothers don't seem to be impressed. They laugh about my 17 cups on the dining-room mantel shelf at home. Mother cleans the cups for me, but I have to do the polishing. I don't like housework and I want to be a professional skater... It is my ambition to skate in Switzerland in the midst of lovely scenery." She turned professional in 1939 and emigrated to British Columbia, where she married, taught at the Kerrisdale Figure Skating Club and Vancouver Forum and passed away in 2008 at the age of eighty six.

Skate Guard is a blog dedicated to preserving the rich, colourful and fascinating history of figure skating and archives hundreds of compelling features and interviews in a searchable format for readers worldwide. Though there never has been nor will there be a charge for access to these resources, you taking the time to 'like' on the blog's Facebook page at http://www.facebook.com/SkateGuard would be so very much appreciated. Already 'liking'? Consider sharing this feature for others via social media. It would make all the difference in the blog reaching a wider audience. Have a question or comment regarding anything you have read here or have a suggestion for a topic related to figure skating history you would like to see covered? I'd love to hear from you! Learn the many ways you can reach out at http://skateguard1.blogspot.ca/p/contact.html.
Posted by Skate Guard Blog at March 27, 2019
Email ThisBlogThis!Share to TwitterShare to FacebookShare to Pinterest
Newer Post Older Post Home