You Can't Handle The Tooth: The Dr. Hulda Berger Story 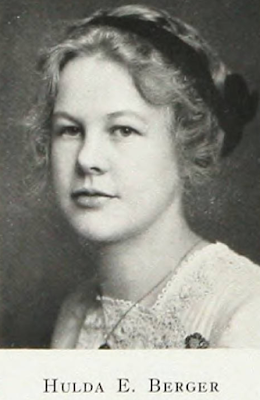 I am sure this will come to no surprise to many of you, but I'm a huge "Murdoch Mysteries" fan. What can I say... I love me some Constable Crabtree. There's just something about bumbling Newfoundlanders in period costume, you know. It's funny, because one of the characters from that show, the delightful Dr. Julia Ogden (played by Hélène Joy) was the first person who came to mind when I stumbled upon the story of today's blog subject, a forward-thinking female doctor from the early twentieth century. In this case, she just happened to be one heck of a figure skater.

Born in Minneapolis, Minnesota on August 15, 1891, Hulda Emele Berger was the youngest of Frank and Edla (Samuelson) Berger's five children. Her parents, Swedish immigrants not exactly rolling in the money, had their hands full raising Hulda, her sisters Edla Jr., Nanda and Maria and her brother Frank Jr. Supplementing his work as an architectural sculptor and wood carver by teaching sculpting to high school students, Hulda's father wasn't a rich man, but he earned great admiration for his designs which adorned a number of Minnesota churches.

While Hulda's other brother apprenticed as an architect, Hulda had a pretty cultured upbringing for a female public school student in Minnesota growing up at the turn of the century. She studied English, mathematics, sciences and even appeared in a massive theatrical production called "Professor Napoleon" in 1910 which featured actors of all ages from both Minneapolis and St. Paul.

Determined to find her own place in the world, Hulda earned her dental surgery degree at the University of Minnesota in 1914 and opened up her own Minneapolis practice with 'Dr. Hulda E. Berger' on the doorplate. She also found time to serve as Vice-President of the Alumni Association of the University Of Minnesota College Of Dentistry. Hulda's professional successes were even more impressive considering that at the time, there were only a few dozen female dental school graduates and several of the country's top dental colleges refused to even admit women.

After her father died and her brother took a job as a draftsman, married and moved out of the family home, Hulda, her three sisters and mother decided to pack it up and move east to Beechhurst, Queens, New York in 1921, where Hulda set up her own private dental practice at 18 East 48th Street in Manhattan. Her sisters took up jobs in the insurance field. Not long after arriving in New York, Hulda fell madly in love... with the ice. What little free time she had was spent practicing counters and brackets in peaceful quietude.She joined the Westchester County Figure Skating Club and found solace from her busy dental practice at the Playland rink in Rye. Soon, she was performing exhibitions regularly at the 181st Street Ice Palace in New York and outskating most of her male contemporaries. 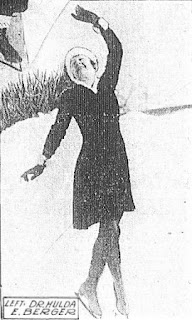 In 1930, Hulda made the trip to Providence, Rhode Island to compete in the U.S. Figure Skating Championships. At age thirty nine, she won the junior women's competition, then based on tests passed and not age. The following winter, at age forty she won the Hobbs and Allen trophies and the senior women's title at the Skating Club of Lake Placid's annual competition and the bronze medal behind Maribel Vinson and Edith Secord at the U.S. Championships in Boston. After skating well but just missing the podium at the 1931 North American Championships in Ottawa, many considered the good doctor a bona fide contender for the 1932 Winter Olympic team. 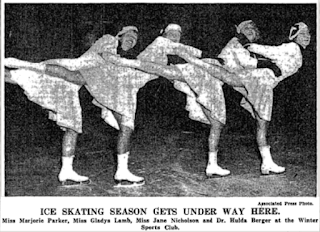 That's not how things panned out. At those Olympic trials in December 1931 (now recognized as the 1932 U.S. Championships) Hulda placed dead last of the seven competitors. Despite again winning the senior women's event at the Lake Placid competition in January 1933, she again finished dead last, this time at the 1933 North American Championships at the Ice Club in New York City. After winning the bronze medal at the 1934 U.S. Championships in fours skating with Edna Harris and Roland and Arthur Janson, the doctor gracefully bowed out from the competitive arena. 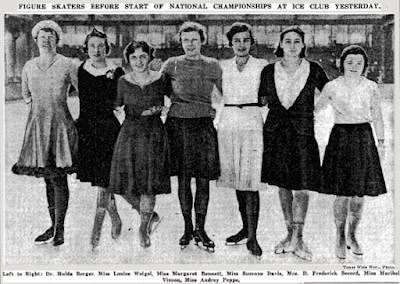 Hulda Berger and her competitors at the 1932 U.S. Championships

That's not to say she stopped skating. Hulda gave exhibitions in pairs skating with James Burgess Green and skated a four with Roy P. Bunt and a Mr. and Mrs. A. Rosenberg to the delight of carnival audiences. She served as President of the Great Neck Figure Skating Club and as a USFSA national and international level judge. She even won an informal Waltzing competition at the Rye Figure Skating Club with partner William Nagle in March 1938 in front of some fourteen hundred spectators... at age forty seven. 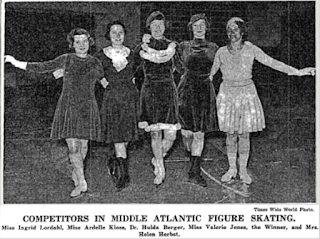 In 1944, Hulda moved from Beechhurst to the Hamptons - Sag Harbor to be exact. She passed away
suddenly on August 24, 1951 in Manhattan, New York just days after her sixtieth birthday of complications following surgery. She never married, instead devoting her life to the care of others and the wonderful, wacky world of figure skating.

Skate Guard is a blog dedicated to preserving the rich, colourful and fascinating history of figure skating and archives hundreds of compelling features and interviews in a searchable format for readers worldwide. Though there never has been nor will there be a charge for access to these resources, you taking the time to 'like' on the blog's Facebook page at http://www.facebook.com/SkateGuard would be so very much appreciated. Already 'liking'? Consider sharing this feature for others via social media. It would make all the difference in the blog reaching a wider audience. Have a question or comment regarding anything you have read here or have a suggestion for a topic related to figure skating history you would like to see covered? I'd love to hear from you! Learn the many ways you can reach out at http://skateguard1.blogspot.ca/p/contact.html.
Posted by Skate Guard Blog at July 23, 2019
Email ThisBlogThis!Share to TwitterShare to FacebookShare to Pinterest
Newer Post Older Post Home