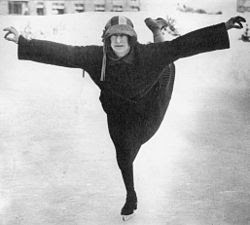 Many unique stories colour the fabric of figure skating's history but perhaps none so literally as Ethel Muckelt. Born May 30, 1885, Ethel was the youngest daughter of Mary Ann (Hanway) and John Muckelt. She had two older brothers (John and Richard), four older sisters (Bertha, Annie, Edith and Lily) and two younger brothers (Frank and Harold). Although it's incredibly hard to wrap your head around having that many mouths to feed, the 1891 UK Census tells us that the family lived at 112 Edge Lane, Stretford in Manchester, England. Manchester's wealth was actually built on the textile industry and the Muckelt family were right at the center of that boom. Out of their home, Standish House, John Muckelt ran Logan, Muckelt & Co. and manufactured and exported indigo blue dyes and printers for the African textile market. 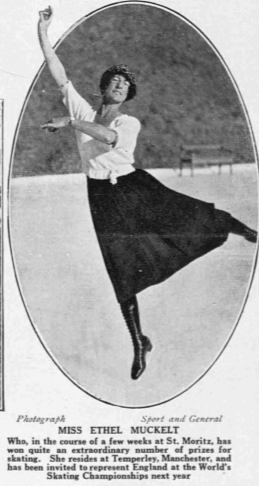 By age fifteen, Ethel was living in a boarding school in Heaton Norris Parish and while she studied, developed an interest in figure skating. Honing her craft at the Manchester Ice Palace in Cheetham Hill, her life would have changed drastically when her father passed away in 1904 at the age of fifty seven and her two oldest brothers were forced to take over the family business. However, the 1911 UK Census tells us that Ethel continued to live comfortably in Sale, Cheshire (not far from Manchester) and focus attention on skating. She benefited from geography. Manchester's rink was the only one open in England during the Great War, as many were converted to munitions factories or used for storage. The famous Westminster Ice Rink wouldn't reopen until 1927 and living in Sale would have absolutely offered her training opportunities other skaters in England wouldn't have had at the time. 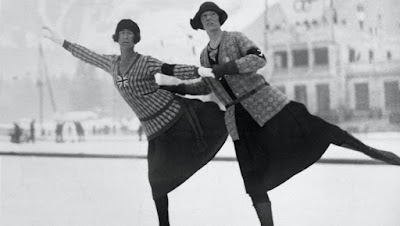 Although Ethel competed regularly in singles competitions at home in England (her main competition being Kathleen Shaw), BIS historian Elaine Hooper asserted, "Although Ethel did skate singles, we regard her as a pairs skater." Her first international competition was indeed in pairs. She finished fifth with Sidney Wallwork at the 1920 Summer Olympics in Antwerp, Belgium at the age of thirty-four. When that partnership dissolved, she entered the 1923 World Figure Skating Championships in Vienna, finishing in last place behind Herma Szabo and Gisela Reichmann of Austria and Sweden's Svea Norén. One would think that in her late thirties, Ethel would have been discouraged and give up but this she was actually just getting started. 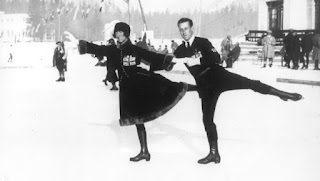 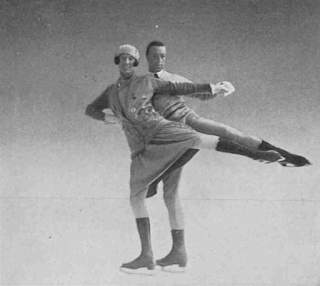 This late bloomer forged a partnership with Jack Ferguson Page and entered the pairs event at the 1924 Winter Olympics in Chamonix, France. They finished just off the podium finish in fourth but earned their only first place vote from British judge Herbert Ramon Yglesias. No national bias there! Ethel wasn't done there. She entered the women's competition as well and won the Olympic bronze medal behind Szabo and American Beatrix Loughran. Her medal win was absolutely credited to her top three finish in the school figures, as she finished seventh of the eight competitors in free skating. In all credit to her ability as a free skater though, if you compare the video of her free skating performance in Chamonix to her pairs performance with Jack, it's like watching two different skaters. She seemed far more polished and at ease skating pairs. In fact, at the 1924 World Championships, Ethel and Jack had the best international result of their career together in winning the silver medal, receiving praise for their fine shadow skating. 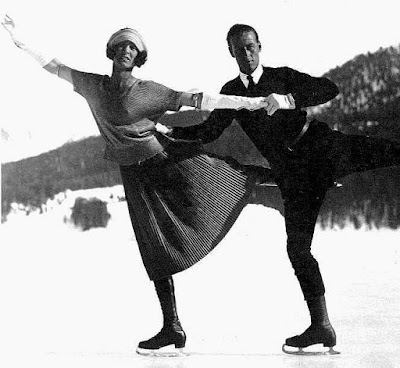 Ethel's last appearance at the World Championships as a singles skater was in 1925. After finishing a disappointing fifth, she focused her attention entirely on her pairs career with Jack. Together, they won the Johnson Trophy for pairs skating in England (donated by two-time World Champions James and Phyllis Johnson) an incredible nine times together while Jack continued to skate singles with varying success. However, T.D. Richardson told an amusing anecdote about Ethel's partner: "He was an extremely fine school figure-skater, but he had absolutely no musical ear at all the sort of man who has to be told to stand up when the National Anthem is being played. While this was undoubtedly a great handicap he was, on the whole, badly treated by Continental and World judges. I had him first on my card at Davos in 1927, when he was the only skater who did not fall at least once most of them, including the winner, were tumbling about in the high wind and driving snow. But nothing could disturb Jack Page, and as Böckl the winner himself said afterwards: 'If ever anyone deserved the title Jack did so on that occasion.'" 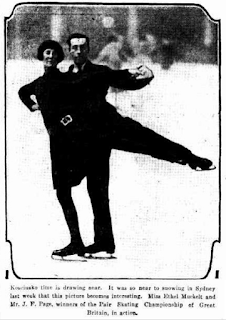 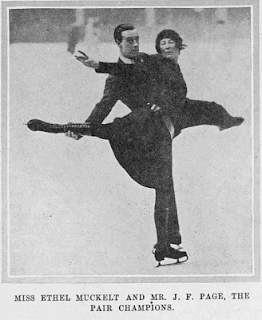 After finishing sixth at the 1926 World Championships, Ethel and Jack reappeared at the 1928 Winter Olympics in St. Moritz, Switzerland. By this time, Jack was twenty-eight and Ethel forty-two. They skated exceptionally well at this event, but placed only seventh out of thirteen teams. Perhaps the most special moment of their careers came at the World Championships in London that followed, when they finished fourth and skated in front of the King and Queen of England. The July 3, 1928 issue of the "Cumberland Argus And Fruitgrowers Advocate" noted that "when they appeared they were enthusiastically applauded" by the royals. An interesting anecdote from that particular competition came from this very same article, which noted that after the competition concluded, Jack, Maribel Vinson, Sonja Henie and Willy Böckl teamed up to give an exhibition of fours skating for the audience and dignitaries present. 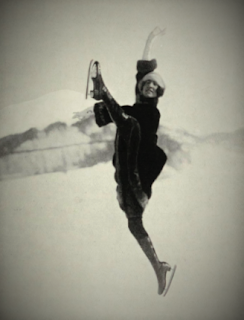 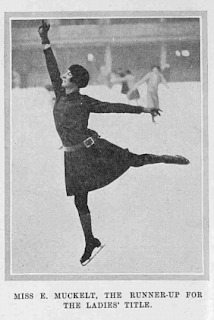 Although those 1928 World Championships were the last time Ethel would compete internationally, she continued to compete (and win) domestically in pairs skating with Jack into the thirties. 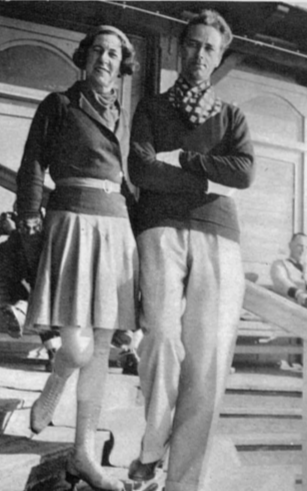 After living in Timperley (also not far from Manchester), Ethel moved to the affluent area of Altrincham in Greater Manchester and became a national and international level skating judge. Among her international assignments were the 1939 World Championships held in Budapest, Hungary just months before World War II broke out. 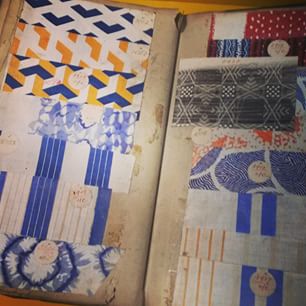 The War obviously slowed Ethel's judging career, but her family's business survived, selling both dyes and dress fabric in West Africa both during and after the War. Articles from the "Kenya Gazette" assert that her family's business continued to operate in Nairobi well into the sixties. However, after surviving the horrific air raids of The Manchester Blitz, Ethel passed away a "spinster" (according to the England & Wales, National Probate Calendar Index of Wills and Administrations, 1858-1966) on December 13, 1953 at the age of sixty-eight at the General Hospital in Altrincham. She remains to this day, at the age of thirty-eight, the oldest woman to win an Olympic medal in figure skating history .

Skate Guard is a blog dedicated to preserving the rich, colourful and fascinating history of figure skating and archives hundreds of compelling features and interviews in a searchable format for readers worldwide. Though there never has been nor will there be a charge for access to these resources, you taking the time to 'like' on the blog's Facebook page at http://www.facebook.com/SkateGuard would be so very much appreciated. Already 'liking'? Consider sharing this feature for others via social media. It would make all the difference in the blog reaching a wider audience. Have a question or comment regarding anything you have read here or have a suggestion for a topic related to figure skating history you would like to see covered? I'd love to hear from you! Learn the many ways you can reach out at http://skateguard1.blogspot.ca/p/contact.html.
Posted by Skate Guard Blog at November 09, 2015
Email ThisBlogThis!Share to TwitterShare to FacebookShare to Pinterest
Newer Post Older Post Home