Whenever the history of figure skating in China is discussed, there's always a certain script that is followed. In 1980, when Irish IOC President Lord Killanin won his long battle to allow Chinese athletes to compete in the Winter Olympics under the People's Republic, the Chinese Skating Association sent Xu Zhaoxiao and Zhenghua Bao to compete in Lake Placid. Both finished dead last. Then, at the World Championships in Dortmund, West Germany, the two Olympic skaters were traded out in the men's and ladies events for Liu Zhiying and Wang Zhili and a pairs team, Luan Bo and Yao Bin, was also sent. All four of these skaters fared no better, again finishing in last place in their disciplines. A rocky start is an understatement.

Bo and future coach Bin, in particular, were the topic of ridicule in their debut effort at the World Championships in 1980. A contemporary Reuters article from February 6, 2010 noted that Bin "heard the crowd laughing at him and pairs partner Luan Bo as they struggled to keep their balance during an unconvincing performance". Among those laughing was three time Olympic Gold Medallist Irina Rodnina, who in a March 21, 2005 article from the Russian Olympic Committee's website recalled, "I remember the debut of the Chinese pairs in the World Championship of the eightieth year. Frankly, I was very much laughing. In this pair was Yao Bin, the current coach of Chinese couples." Another classy moment for the politician who may or may not have tweeted a racist picture of President Barack Obama. But I digress...


Then in early November 1980, a contingent of elite (mostly American) skaters converged on the People's Republic China to perform a rare exhibition of elite level figure skating for China's people and offer some basic instruction to China's skaters. Among the contingent of skaters who went to China were Toller Cranston, Peggy Fleming, Tai Babilonia and Randy Gardner, Linda Fratianne, Jojo Starbuck and Ken Shelley, Lisa-Marie Allen, Judy Blumberg and Michael Seibert, David Santee and Elaine Zayak. Recalling the China expedition in the October-November 1981 edition of the "Canadian Skater" magazine, Santee remarked, "It was such a totally different experience from any I'd ever had. The Chinese are a happy, congenial people, almost naively content with what they have. For so many years they were cut off from outside. They have very little idea what the rest of the world is doing." Taped for ABC's Wide World Of Sports, an edited version of the show was edited and broadcast to American audiences on December 27, 1980. In my 2014 interview with Wide World Of Sports producer Doug Wilson, he recalled the trip thusly: "I was there for the first visit of U.S. skaters in China. It was grey, with no cars... bicycles and piles of cabbage on the sidewalk... the whole experience was incredible. To go again in the nineties and find a KFC sign dominating the main street and vitality, cars, people and commerce thriving... it was just extraordinary."


The expedition sparked great interest in skating in China and before long something miraculous happened. North American coaches started heading to the Communist country at the invitation of Chinese Skating Association president Jing Bowen to help develop the country's skating programs and athletes. By February 1, 1988, Wang Yingfu, the general secretary of the Chinese Skating Association, was remarking that "we've improved a lot in some events and believe we can finish around the middle in most of our contests." He wasn't too far off either. At the 1988 Winter Olympics in Calgary, Zhang Shubin finished twentieth in a field of twenty eight men, ahead of Michael Huth and Peter Johansson, who would both go on to prominent coaching careers. Only three years later, Lu Chen was on the podium at the World Junior Championships. Four years later, she was the first skater from China to win the World Championships. In 2010, Xue Shen and Hongbo Zhao became the first skaters from China to win an Olympic gold medal.


That's the abbreviated version of the first act of Chinese skating history's script that we've all come to know. It of course excludes the Eight Banner Ice Skating Battalion and the royal skater Wu Tongxuan. It also excludes how skating developed as a sport in the country long before North Americans came along to offer their valuable assistance... which is actually quite a unique story.

Recreational ice skating actually thrived in Harbin's Jewish quarter in the thirties. Yaʼacov Liberman, in his 1998 book "My China: Jewish Life in the Orient, 1900-1950" recalled that in his youth, "as winter approached, the center of activity would move to the two existing skating rinks in the city. One was located in the Apothecary Street Stadium and the other on Commercial Street. The cold winter kept the ice hard, and the Chinese staff smoothed it by watering it each day. If you were looking for someone in Harbin in winter, you could easily find him or her at one of these rinks... At the Apothecary Street skating rink, a glassed-in wooden hut had been built for the orchestra. The band was composed of White Russian musicians whose repertoire was limited to waltzes and polkas. At the Commercial Street rink, the music was provided by a blaring loudspeaker wired to a gramophone... Indoors there was an array of small stoves to warm your body, while the expert hands of the Chinese personnel massaged your frozen feet back to life." 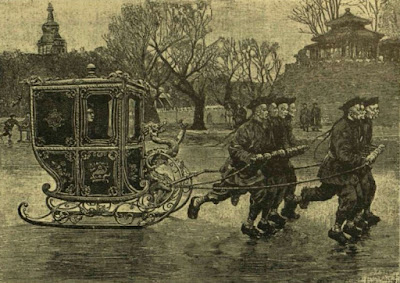 1895 Hungarian engraving of skaters pulling a royal carriage in Beijing

As for competitive skating, way back in 1939 the Chinese Communist Party set up a Yenan Sports Committee that was sponsored and guided by the Youth Work Committee of the party's Central Committee. They oversaw the development of competition in a wide range of both winter and summer sports. As early as the winter of 1942, ice skating competitions were organized among government workers, army members, factory workers and student groups. Equipment was an issue. Jonathan Kolatch's 1972 book "Sports Politics And Ideology In China" tells us that in the forties "ice skates were manufactured by adding blades, made in the Yenan Iron Works, to slabs of wood. Boots captured from the Japanese often served as the skate shoes."

The party was of the belief that training in ice skating had to begin by the age of eight or nine. In the late fifties - the era of China's labour-defense system and The Great Leap Forward - the Physical Culture and Sports Commission of the People's Government developed a new decree which required all students between the ages of thirteen and fifteen to prove proficiency in six events: a sixty meter dash, a four hundred meter dash, long or high jump, grenade or softball throw (yeah, you read that right!), rope or pole climb and a sixth event "according to local conditions". In the country's north (in Harbin, for instance) that sixth event was more often than not ice skating.

The first ice sports school opened in Harbin in 1953 and skaters trained in the flooded field of the Red Star Stadium and travelled north to Heihe in the northern Heilongjiang province, where they practiced on the frozen Black River. In 1956, the Chinese Skating Association became the second Asian country to join the International Skating Union. The following year, a Czechoslovakian coach and four of his pupils came to Harbin and gave Chinese coaches and skaters their first exposure to world class skating. Before long, figure skating was being contested at the National Games of the People's Republic of China.

However, as Joy Goodwin's book 2004 "The Second Mark: Courage, Corruption And The Battle For Olympic Gold" explained, it wasn't all roses: "In October 1968 the entire figure skating team was 'smashed and discarded.' and its former participants were placed under the supervision of the Management Group of the People's Liberation Army. A formal order stated that as sports teams had been infiltrated and controlled by bad people, the athletes must be re-educated and politics must be stressed. In Harbin, the ice sports school was locked and stood empty, and the skaters were shipped out under army supervision to Chalianhe, Tonghe County." There, in a former labour camp for prisoners, China's figure skaters were forced to work on a farm, subsist on sorghum and corn flour and participate in 'struggle sessions' were they verbally assaulted their former coaches. In June of 1969, they returned to Harbin only to be shipped back for more of this perverse 'thought-remoulding' months later. In 1970, they finally returned to Harbin and those skaters allowed to return to the Harbin ice sports school were allowed to resume training. For another ten years, Chinese skaters quietly toiled away on the ice in relative obscurity and under close scrutiny.


Learning about the role that the government and education system played in turning the Chinese people on to skating long before 'North America showed up' actually reminded me A LOT of the blog I wrote on the history of skating in Colonial America where we learned of the Iroquois people skating up a storm long before 'the white man' showed up. Although the story of how the Chinese skating program developed was not always pretty, it is a fascinating glimpse into how unique each country's skating history can truly be.

Skate Guard is a blog dedicated to preserving the rich, colourful and fascinating history of figure skating and archives hundreds of compelling features and interviews in a searchable format for readers worldwide. Though there never has been nor will there be a charge for access to these resources, you taking the time to 'like' on the blog's Facebook page at http://www.facebook.com/SkateGuard would be so very much appreciated. Already 'liking'? Consider sharing this feature for others via social media. It would make all the difference in the blog reaching a wider audience. Have a question or comment regarding anything you have read here or have a suggestion for a topic related figure skating history you would like to see covered? I'd love to hear from you! Learn the many ways you can reach out at http://skateguard1.blogspot.ca/p/contact.html.
Posted by Skate Guard Blog at May 24, 2016
Email ThisBlogThis!Share to TwitterShare to FacebookShare to Pinterest
Newer Post Older Post Home