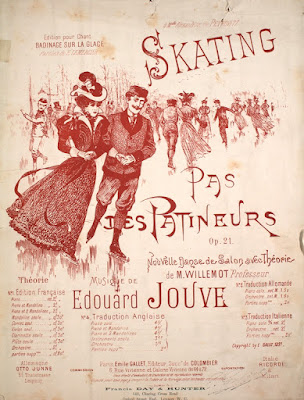 "Skating to music is the most rhythmic of all exercises and far surpasses dancing in enjoyment and benefit." - Charlotte Oelschlägel

Surprisingly, an often neglected detail when considering each and every story that pops up when researching skating history is the music that skaters performed to. American skating king Jackson Haines may have been one of the first to popularize the marriage of music and movement on ice but the early history of skating's relationship with music goes far beyond that.

Military bands often played at ice rinks in the late nineteenth and early twentieth century and set the tone of classical music being widely accepted as appropriate music for free skating. Many prominent skating authors of the era such as George Browne and Madge and Edgar Syers advocated setting free skating programs to marches and waltzes. Irving Brokaw's 1910 book "The Art Of Skating" further proposed suitable music suggestions for free skating, including waltzes to Strauss, "L'Estudiantina" and "Dollar Princess", two-steps to "A Frangesa" and "Yankee Patrol", a Swedish mazurka to "La Czarina" and Russian polkas. 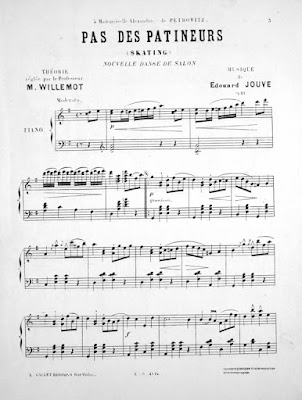 When the well-to-do Lili Kronberger of Hungary won her final of four World Championships in Vienna in 1911, she caused a stir and gained much admiration by bringing an entire military band with her to accompany her performance with a rousing rendition of "Pas De Patineurs". However in the decades that followed (in amateur competition at least) with the exception of musically attentive skaters like Gillis Grafström and Karl Schäfer, many skaters continued to treat music as background to their free skating and not the integral part of the performance it is considered in present day. In fact, some prominent coaches like 1906 World Bronze Medallist Bror Meyer perpetuated this ignorance towards music, instead suggesting that the focus of free skating should be on executing "edges, turns, jumps and two-foot whirls... in such a manner that the spectator gets a clear understanding of the design" and that these designs "do not necessarily have to be timed to music." Meyer wasn't technically wrong though because often times skaters didn't even have the choice of what music they even skated to. At the 1932 Winter Olympics in Lake Placid for instance, all twelve of the men's skaters competing were accompanied by a military band that played the same piece of music: Jacques Offenbach's "Orpheus At The Underworld". Think three or four "Phantom Of The Opera" programs is too much? Imagine twelve programs to the same music in a row!

The trend for skaters to arrive at competitions with their very own music specifically cut on gramophone records wasn't one that really began to take hold until the mid-thirties. It was started with skaters from the U.S. and Canada, with European skaters following suit shortly thereafter. Stories about mysterious musical mishaps in international competitions - like Sonja Henie's rival Cecilia Colledge having the wrong record played at the 1936 Olympics - started to crop up around this time too. In Barbara Ann Scott King's 2010 interview on The Manleywoman SkateCast, she similarly recalled "in Prague in 1948, I started out from a standstill, three Axels into a sit spin, and as the music went duhhh, the music went screech. And I thought, well, what do I do now? If I keep going, the music will all be off. Or do I stop? So I thought, well I'd better stop. And it was the right decision, because they let me start again. It was rather a shock, I can tell you. In those days, we had those big records on the gramophone or whatever it was called. And somehow the arm with the needle went screeching across, I don’t know what happened." Not to point fingers, but more often than not the victims of musical mishaps always seemed to be Britons, Americans and Canadians. Take that for what you will!

In Howard Bass' 1966 book "Winter Sports", we were offered a rare glimpse at the musical choices of several greats from the first half of the twentieth century: "For many enthusiasts, myself included, Cecilia Colledge initially drew much closer attention to the beautiful 'Dream of Olwen'. But for Bridget Shirley-Adams' charming interpretation, I should probably never have learned to like 'Clair de Lune' so much, while Graham Sharp and Daphne Walker in the same way commanded a similar respect for George Gershwin's 'Rhapsody In Blue'. 'Blithe Spirit' bore a new significance when used to accompany the truly artistic skating of America's Phil Romayne and his former partner, Terry Brent, just as the conscientious Jeannette Altwegg's meticulously timed exhibitions to a selection from 'Carissima' attracted fresh interest in that delightful disc. Those not already aware of it may be quite startled to realize that Barbara Ann Scott skated publicly to 'Ave Maria' long before Hans-Jürgen Bäumler and Marika Kilius did, and Tenley Albright performed to 'Old Man River'. For a light-hearted encore, Dick Button had many a packed audience clapping loudly to time while he skated to 'American Patrol'. Typical of suitable music in a more serious vein are the lovely Strauss 'Rosen-kavalier Waltz', popularized on skates by Hans Gerschwiler, and Liszt's 'Hungarian Rhapsody'."

The musical choices of skaters have gotten more diverse very gradually over the decades. Much like mainstream music, there have certainly been many distinct phases and trends. Like it or lump it, even now that skaters have been afforded the opportunity to use lyrical music in all four disciplines of ISU competition, we still hear Liszt's "Hungarian Rhapsody", Strauss waltzes and the ever dreaded "Carmen" by Bizet more often than not and with the conservative approach that permeates the work of many elite choreographers, I don't see that changing any time soon. Change doesn't happen overnight!

Skate Guard is a blog dedicated to preserving the rich, colourful and fascinating history of figure skating and archives hundreds of compelling features and interviews in a searchable format for readers worldwide. Though there never has been nor will there be a charge for access to these resources, you taking the time to 'like' on the blog's Facebook page at http://www.facebook.com/SkateGuard would be so very much appreciated. Already 'liking'? Consider sharing this feature for others via social media. It would make all the difference in the blog reaching a wider audience. Have a question or comment regarding anything you have read here or have a suggestion for a topic related figure skating history you would like to see covered? I'd love to hear from you! Learn the many ways you can reach out at http://skateguard1.blogspot.ca/p/contact.html.
Posted by Skate Guard Blog at May 07, 2016
Email ThisBlogThis!Share to TwitterShare to FacebookShare to Pinterest
Newer Post Older Post Home