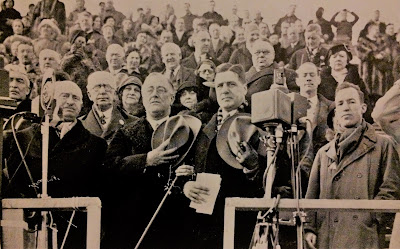 The 1932 Winter Olympic Games in Lake Placid, New York were really a prime example of something coming together marvellously at the eleventh hour. Construction of venues in what was then only a village of less than three thousand began only two years before the Winter Games made their first trip to North America. However, just a few days before the Games began, the village had no snow. It wasn't until February 3, 1932 that the sky opened up and a blizzard blanketed the ground just in time for the opening ceremonies of the Games the very next day. 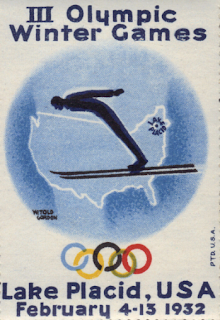 American stamp designed in conjunction with the Lake Placid Games

Three hundred and sixty four athletes from seventeen countries were in attendance and although the figure skating competitions in New York were held decades before Olympic coverage was televised, America and the world were transfixed on the newly built two thousand seat indoor arena and every figure, step and spin performed on the ice surface that February.


The excitement on the ice all really started the month before. Many figure skaters from outside of the U.S. came to the country on passenger liners by way of New York, where they performed exhibitions before heading to Lake Placid in mid-January. As they arrived to practice in the newly completed indoor rink, audiences - and judges - were already filling the seats. The Official Olympic Report of the Games compiled by George M. Lattimer notes that "afternoon and evening during this pre-Olympic period the huge building was thronged with spectators. They were entranced with the grace, artistry, and ease with which the ranking ice stars executed the difficult figures." 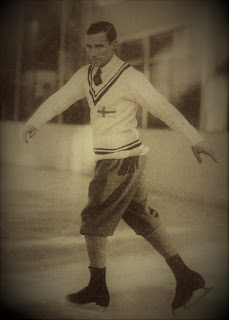 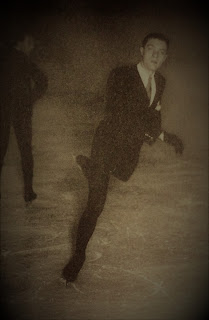 In the March 1932 edition of "Skating" magazine, Joel Liberman (the referee of the men's event) noted that defending Olympic Gold Medallist "Gillis Grafström immediately upon his arrival exhibited his Tango, Waltz and Swedish Mazurka, all containing skating moves definitely composed and adapted to a set piece of music." Another defending Olympic Champion, Norwegian Sonja Henie, established herself as something of a media darling with the American press. She also got hit on at the Cellar A.C. (athletic club) bar at the Belmont Hotel (where scotch was only fifty cents) by a newsman from Park Avenue. Her father and manager Wilhelm 'Papa' Henie sent him running. 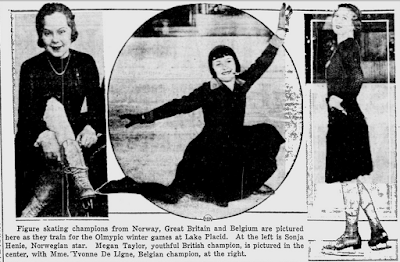 The figure skating events began on February 8, 1932 with the men's compulsory figures. Three-time Olympic Gold Medallist Grafström looked unbeatable on paper as the three time and defending Olympic Champion. However, in his late thirties and hampered by an injury sustained when he dropped a camera on his knee, he almost withdrew before the event even began. Even if he hadn't been injured, he also had the much younger Karl Schäfer of Austria nipping at his heels.

Speaking of nip, you have to wonder if Grafström filled up a flask at the Belmont Hotel competing. He was rumoured to have taken more than a few swigs when he was sick at the Chamonix Olympics... and in Lake Placid he performed the wrong figure entirely in one case. Don't know. Just saying. At any rate, Grafström ended up with 1496.0 points to Schäfer's 1553.0 and had a lot of ground to make up if he wanted to make his Olympic gold medal count four. In third place was Bud Wilson of Canada with 1477.6 points; in fourth Marcus Nikkanen of Finland with 1450.8. 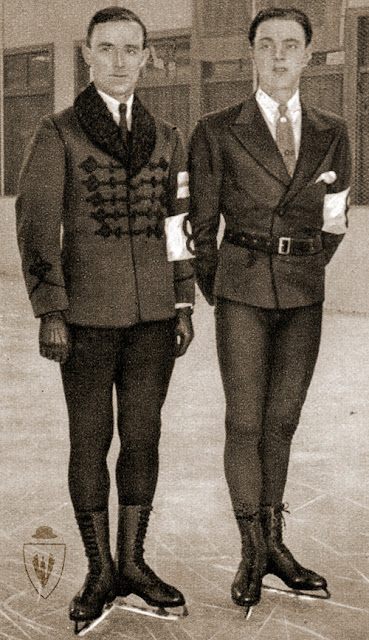 Sportswriter Howard Bass made an apt and perhaps glaringly obvious observation in his 1971 "International Encyclopedia Of Winter Sports" that usually rang true even back in the dirty thirties: "In how many sports do the majority of supporters only watch half of a championship? This is a novel aspect of figure skating. The spectacular appeal of of freestyle jumps and spins magnetises capacity stadium crowds... but the compulsory figures which precede all this usually take place at a comparatively deserted rink, in a hushed atmosphere of almost cathedral-like dignity, when a sudden burst of laughter would seem quite out of place." Although that was true ninety nine percent of the time, the women's school figures at the Lake Placid Games - held the next day on February 9, 1932 - were a marked exception. 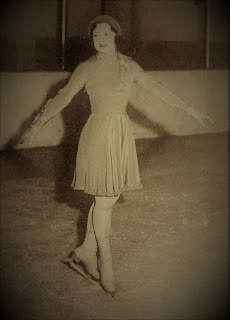 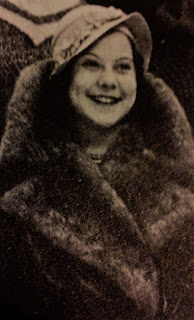 Perhaps owing to the Sonja sensation, the rink was quite packed for the women's school figures. The competition started early in the morning and took up much of the afternoon, and after the six prescribed figures had been performed, Sonja Henie had amassed a seventy point lead over American Maribel Vinson and Austria's Fritzi Burger. 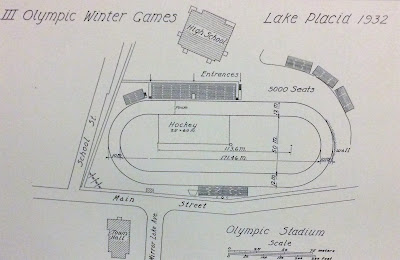 Sketch of the Olympic Stadium

Let's move on to the men's free skate, held on the evening of February 9, 1932. George and Stephen Ortloff's wonderful 1976 book "Lake Placid: The Olympic Years 1932-1980" noted: "The music was live, played by a military band in one section of the crowded bandstands, and all the competitors skated to the same tune: a medley that began with that big-top favourite, 'Orpheus In The Underworld'." I guess it could have been worse and everyone could have picked "Phantom Of The Opera" like in the 2014/2015 season. And yes, I just made that shudder that Sideshow Bob made every time he stepped on a rake on The Simpsons.

Grafström couldn't catch a break and had to settle for silver in the most ironic of ways. After injuring himself by dropping a heavy camera on himself before the competition, in his free skate he collided with a photographer. Karl Schäfer ended up taking the gold with a very strong performance that left him with an almost eighty eight point lead. Canada's Bud Wilson was over sixty five points back of Grafström, but he took home the bronze medal. Marcus Nikkanen was fourth and in fifth was future Olympic Gold Medallist in pairs skating, Ernst Baier of Germany. Rounding out the twelve man field were four Americans, two Japanese men and one eccentric millionaire who claimed to be a baron. We'll look at that man - Walter Langer of Czechoslovakia - in a future Skate Guard blog.


Although the men's event was well attended, the women's free skate the next day was by all accounts standing room only. Every seat was sold and scalpers stood outside of the arena selling tickets at up to fifty dollars a pop. With inflation, that's well over eight hundred and fifty dollars today. The best part? People were buying. Everyone wanted to see Sonja Henie's free skating performance on February 10, 1932.

Scalping tickets wasn't the only shady business going on off the ice though. In the press box, newsies were conducting a poll as to which skater was the prettiest between Sonja or Belgian Yvonne de Ligne. Hoping to thicken the plot like a good gravy and make good on their hype coverage of three eleven year old British girls competing - Megan Taylor, Cecilia Colledge and Mollie Phillips - the press also (according to the Ortloffs' book) "applauded loud and long, trying to root their 11-year-old Briton to victory, thinking it would impress the judges by an exceptional ovation. But Mollie Phillips' marks were not that good - the judges didn't vote by what they heard, but by what they saw - they gave her 698.1 points." 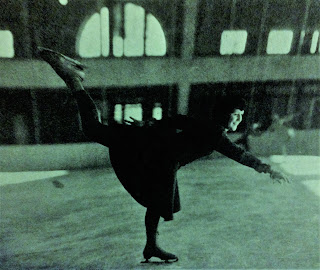 In the end, Fritzi Burger moved up to claim the silver ahead of Maribel Vinson and Henie earned 932.00 in free skating to claim her second of three Olympic gold medals. In her book "Wings On My Feet", Henie commented on her second Olympic win thusly: "There was no little Hilde (Holovsky) to thrust her way through the front rank, but the rank was strong and the victory equally gratifying. Fritzi (Burger), Maribel Vinson, and Constance Wilson-Samuel were in the field, and placed in that order behind me... I felt I had really achieved something when the title was still mine at the end."

On the other side of the coin, on the wonderfully crafted 1999 HBO documentary "Reflections On Ice: A Diary Of Ladies Figure Skating", Fritzi Burger reminisced on her rivalry with Henie at the Lake Placid Games: "I think I had the hope against hope really that maybe one day I could beat her. Maybe one day she'd break a leg, maybe one day she has a cold or can't skate or whatever. Didn't happen. I don't think Sonja ever had a cold in her life." 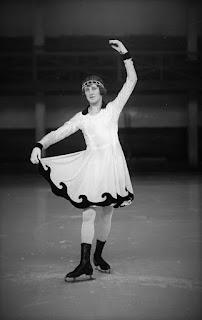 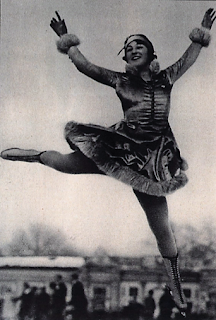 The final of the figure skating events in Lake Placid was the pairs competition, which of course only consisted of a single free skate... and the Spokane Daily Chronicle affirmed that this event too was in front of "a packed house". That said, in true Olympic figure skating fashion, there was of course talk of judging. The gold medal went to married couple Andrée and Pierre Brunet of France and the silver to New York City's Beatrix Loughran and Sherwin Badger... and it was a close fight that all came down to math. Loughran and Badger actually earned 77.5 points to the Brunets' 76.7 but the ordinals gave the French pair the victory. The Ortloffs' book noted that "two judges ranked the American pair first, but three judges picked the French Champions Brunet and Brunet. Each of these three judges ranked Loughran and Badger second by a mere tenth of a point, while the judge from Finland picked the American team over the French team by 1.2 points, and that amounted to the difference in the point totals." 1931 World Champions Emilia Rotter and László Szollás edged out 1931 European Champions Olga Orgonista and Sándor Szalay for the bronze medal and Canadians siblings Constance and Bud Wilson had to settle for fifth place of the seven teams competing. Fifty two year old USFSA President Joseph Savage, who finished last with partner Gertrude Meredith, earned his rightful place in the record books as the oldest figure skater to ever compete at the Olympic Games. 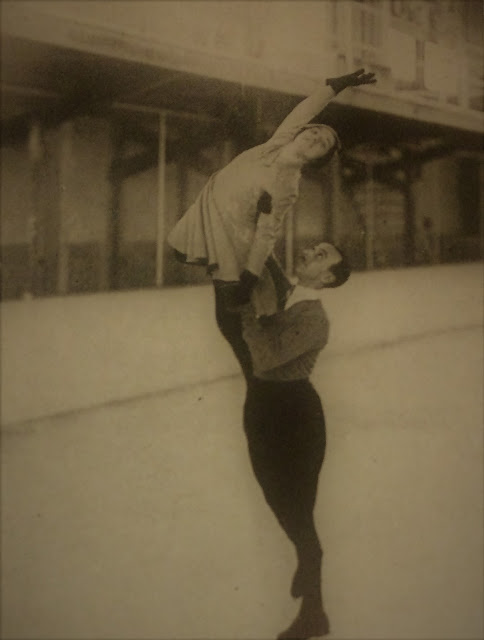 The Brunet's in Lake Placid

Following the Games, a good many of the competitors from overseas just simply stayed put in North America and headed directly to Montreal, the site of the 1932 World Figure Skating Championships from February 28 to March 1, 1932 and performed exhibitions prior to the competition. In fact, all four of the Olympic Gold Medallists would attend those World Championships and win gold medals. You don't see that too often in an Olympic year these days, do you?

All of this said, looking back at this competition and seeing how four European skaters claimed gold medals and the hearts of North American audiences in the period in between two World Wars certainly serves as a reminder that skating is a universal language of peace.

Skate Guard is a blog dedicated to preserving the rich, colourful and fascinating history of figure skating and archives hundreds of compelling features and interviews in a searchable format for readers worldwide. Though there never has been nor will there be a charge for access to these resources, you taking the time to 'like' on the blog's Facebook page at http://www.facebook.com/SkateGuard would be so very much appreciated. Already 'liking'? Consider sharing this feature for others via social media. It would make all the difference in the blog reaching a wider audience. Have a question or comment regarding anything you have read here or have a suggestion for a topic related figure skating history you would like to see covered? I'd love to hear from you! Learn the many ways you can reach out at http://skateguard1.blogspot.ca/p/contact.html.
Posted by Skate Guard Blog at June 22, 2017
Email ThisBlogThis!Share to TwitterShare to FacebookShare to Pinterest
Newer Post Older Post Home