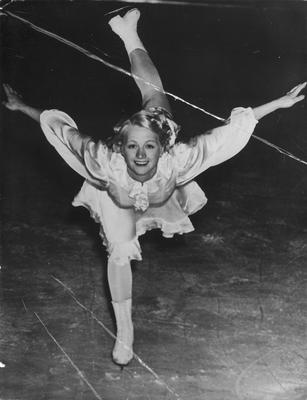 "Melitta, who possessed a speedy, spacious, easy and powerful style that was typically Viennese, combined this with a warm and sparkling personality designed to 'draw' the public and she made herself a remarkable personality in the skating world." - Jacqueline du Bief, "Thin Ice" 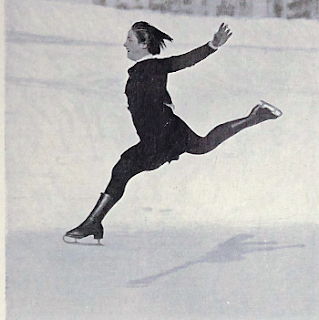 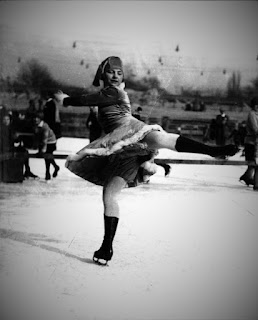 Born July 28, 1907 in Vienna, Austria, Melitta Brunner grew up in an athletic family. Her father was the President of a local rowing club and an avid ice skater. He taught Melitta and her only brother how to skate on the frozen Danube River when she was seven. After five years of skating for pleasure, she became a member of the Wiener Eislaufverein. After only a year of formal instruction in figure skating from coach Pepe Weiss, she entered and won her first competition. Her prize for winning was a silver brooch. 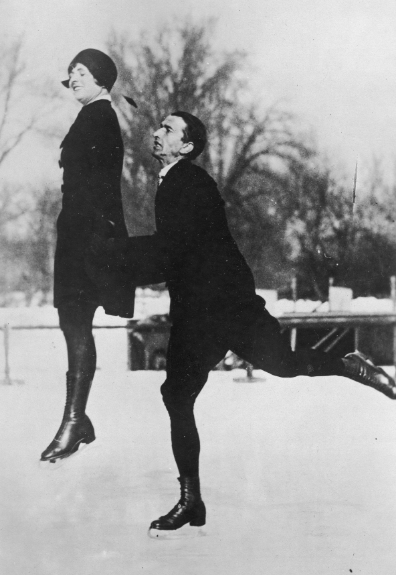 A graceful skater, Melitta supplemented her on ice instruction by studying dance and rhythmic gymnastics at the Festspielhaus Hellerau in Dresden. After entering an endless stream of smaller international competitions in Berlin, Troppau and Vienna, she teamed up with Ludwig Wrede - eleven years her senior - and placed third in the 1922 Austrian Championships. Competing concurrently in both singles and pairs, Melitta always seemed to find herself in the shadow of the grand dames of Austrian skating at the time, Herma Szabo and Fritzi Burger. 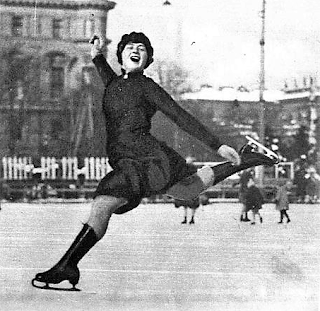 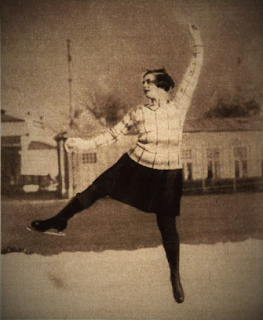 Melitta made her debut in 'the big leagues' at the 1928 Winter Olympic Games in St. Moritz, Switzerland. She placed seventh in the women's competition and won the bronze medal in the pairs event with Ludwig Wrede. In both events she received ordinals as high as second. At the World Championships that followed in London, she placed fifth in the women's event and again, third in pairs. The following year, she won an international figure skating competition for women held in conjunction with the European Championships in Davos. At the World Championships in Budapest, she medalled in both the women's and pairs competition. In the women's event, Finnish judge Walter Jakobsson had her in first place, ahead of both Sonja Henie and Fritzi Burger. In fact, she only lost the silver medal at that event to Burger by one ordinal placing. 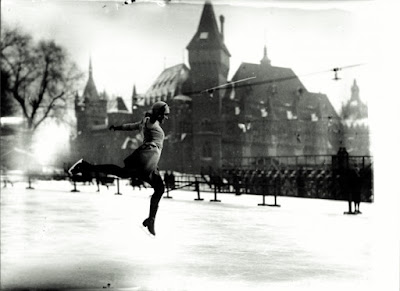 During her competitive career, Melitta studied textiles at the Vienna College Of Design and often sewed dresses for fellow skaters. She got on well with many of her competitors, maintaining friendships with Sonja Henie, Fritzi Burger and young Hilde Holovsky. 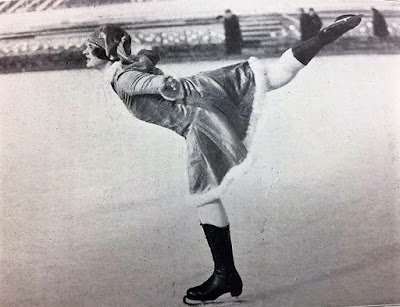 In her first overseas trip, Melitta won the silver medal in the pairs event behind the reigning Olympic Champions and placed fifth in the women's event at the 1930 World Championships in New York City. Gunnar Bang felt she got lost in the shuffle at this event: "Her free skating is so uniquely beautiful and artistic... Her musicality... her stylish jumps and pirouettes... Yes, I would go so far [as to agree with what] Miss Blanchard says: that whatever Miss Brunner showed was exactly contrary to what [the North American women] showed." That event proved to be Melitta's swan song in the amateur ranks. She retired from the competitive scene an Olympic Bronze Medallist and four time Medallist at the World Championships in two disciplines. 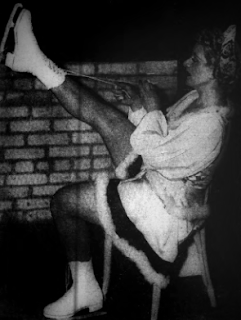 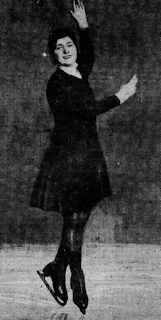 In 1931, Melitta headed to Switzerland, where she taught skating for a time before heading to England to teach at the Westminster Ice Club. While there, she won the World Professional title and started seeing a German skater named Paul Kreckow who placed second in the pairs competition with partner Trudy Harris. Paul and Trudy debuted their creation at that event, the Harris-Kreckow Tango, which later became known as the Tango compulsory dance. In December of 1932, Melitta and Paul married in London. Their marriage was short-lived and Paul was rumoured to be hauled off by two men from the Home Office as a suspected spy. 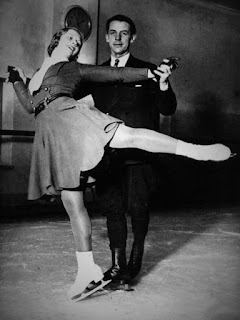 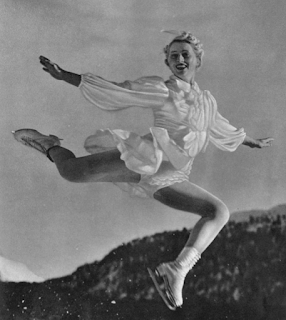 
After continuing her dance training at the Kurt Jooss Ballet School at Dartington Hall in Devon, Melitta starred in Claude Langdon's lavish ice pantomime "Marina" before sailing to America from Southampton aboard the French Line's S.S. Paris.


Upon her arrival, Melitta took part in several club carnivals. The March 14, 1937 issue of "The Philadelphia Inquirier" raved, "A golden-haired fraulein, 26-year-old Melitta Brunner from Austria, proved to be an enchanting butterfly as she danced on skates last night at the Arena before an overflow crowd of 6300 which included standees. Striking the very keynote of Schiaparelli's latest motif for butterflies this spring, Melitta's interpretation was an evanescent and fragile as the winged messenger she personified... Fraulein Brunner selected a light blue shade for her costume that embodied her from neck to foot, fitting like a glove of her svelte figure. Her colorful wings, light and airy, seemed more of a part of her as she glided over the rink in the blue shadows of the spotlight that traced her movements." One of her signature numbers was a performance to Nikolai Rimsky-Korsakov's "Scheherazade".


Melitta headed to Hollywood for a screen test, which didn't go so well. Instead, she joined The Black Forest revue, dazzling audiences at both the New York and Dallas Expositions. She helped with choreography for several of Sonja Henie's ice revues and her image appeared on the cover of "Sports Illustrated" magazine, which then sold for a quarter. 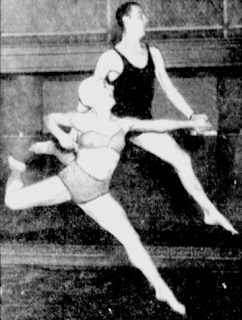 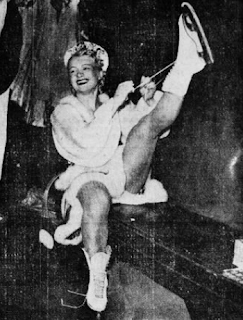 Heading back to Great Britain, Melitta appeared in the show "Winter Sports" at the Alhambra Theatre in Glasgow. Throughout much of World War II, she taught skating in Scotland in one of the handful of ice rinks in Great Britain that weren't commandeered for war purposes or damaged by bombing. 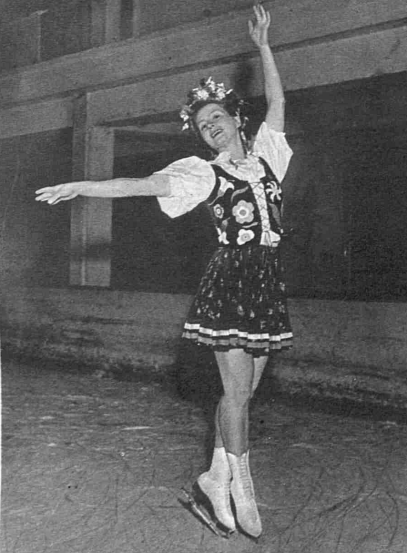 After the War, Melitta taught skating in London and took part in several of Tom Arnold's pantomimes. She later toured with a revue in Italy called "La Féerie de la glace" as a replacement for Olympic Gold Medallist Micheline Lannoy and performed in Egypt with the International Ice Revue, toured Sweden with her own ice show, travelled in India and returned to Tom Arnold's employ, starring in the "Ice Circus" show at the S.S. Brighton. 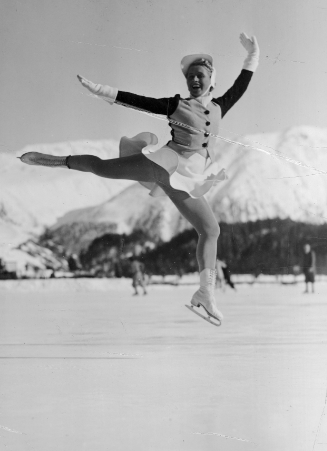 Keeping one skate in the fashion world, in 1964 she exhibited a line of custom lounge wear, après-ski clothing and sportswear at the New York World's Fair as part of a presentation by Hess' Department Store. Unhappy with many of the options available during her own days as a competitor, she also helped revolutionize skating costumes utilizing many of the new stretch fabrics available at the time. 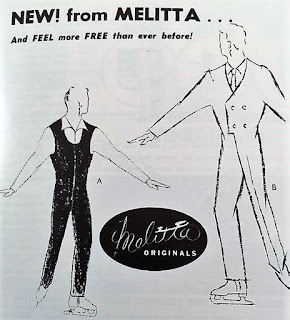 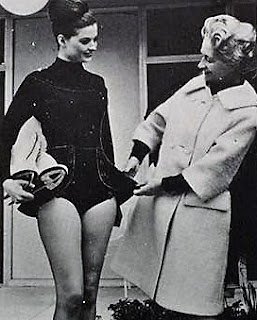 Melitta retired from coaching in 1968 but skated well into her nineties. In a rare performance at age ninety one in the "Skaters' Tribute To Broadway" show at the First Union Center in Philadelphia, she performed to "Rhapsody In Blue". She quipped to reporter Bill Fleischman, "Old age has been merely a nuisance." 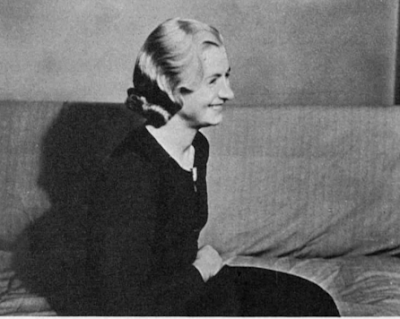 Living out her final years in a seniors apartment in Philadelphia, Melitta recalled her Olympic experience in the twenties with perspective, saying, "To take place in any Olympics is an honour. No matter if you take second place or tenth place." Inducted into Pennsylvania Sports Hall Of Fame, Delaware County Chapter in 2000, she passed away three years later on May 26, 2003 in Philadelphia of leukemia. At the time of her death, she was the oldest surviving figure skater who competed at the 1928 Olympic Games in St. Moritz.

Skate Guard is a blog dedicated to preserving the rich, colourful and fascinating history of figure skating. Over ten years, the blog has featured over a thousand free articles covering all aspects of the sport's history, as well as four compelling in-depth features. To read the latest articles, follow the blog on Facebook, Twitter, Pinterest and YouTube. If you enjoy Skate Guard, please show your support for this archive by ordering a copy of the figure skating reference books "The Almanac of Canadian Figure Skating", "Technical Merit: A History of Figure Skating Jumps" and "A Bibliography of Figure Skating": https://skateguard1.blogspot.com/p/buy-book.html.
Posted by Skate Guard Blog at February 26, 2019
Email ThisBlogThis!Share to TwitterShare to FacebookShare to Pinterest
Newer Post Older Post Home