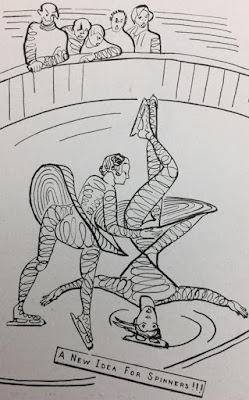 Food rationing had begun in England and in Nazi Germany, Luftwaffe Colonel Hermann Göring had taken control of most of the War industries. Submarines were sunk; airplanes grounded. Behind drawn curtains, they tapped their toes to gramophone records of Dolly Dawn's "At Sundown", dreaming of a time when the sky wasn't so grey and gloomy.

The year was 1940 and the Canadian skating community was really only just starting to feel the effects of World War II. Though some patriotic skaters were already engaged in War work or in military training, many skating clubs were actually seeing significant increases in membership due to the Canadian government's 'Sports-As-Usual' campaign, which encouraged people to get involved in sports and recreation "in times of strain such as these" to get 'fighting fit'.

The 1940 Canadian Figure Skating Championships, held at the Minto Skating Club in Ottawa on January 19 and 20 of that year, were the last Canadians to be held under the auspices of the Amateur Skating Association Of Canada. That autumn, the organization would become the CFSA. There was a marked reduction in entries from the West in 1939, with all of the skaters (save one) coming from the Toronto Skating Club, Granite Club, Minto Skating and Montreal Winter Club. Four out of the six judges at the event were former Canadian Champions - Douglas Henry Nelles, John Z. Machado, Norman V.S. Gregory and Melville Rogers.

How did things play out that January in Ottawa? Let's take a trip back in time and look at the stories and skaters that shaped the first Canadian Championships to be held during World War II.

In a three-two split of the judging panel, Shirley Halsted and Michael Kirby took top spot in the junior pairs event over their training mates Margaret Wilson and Peter Killam. Montreal's Helen Malcolm and Peter Stranger took the bronze.

Sixteen year old Denis Ross of the Minto Skating Club capitalized on a decisive lead in the figures to win the junior men's crown over Toronto's Michael Kirby and John Milsom, with first place ordinals from four out of five judges. Minto Club member Joan Parkins praised Ross for his "spins and jumps together with his excellent foot-work... [and] plenty of dash" but noted that Michael's "free skating is if anything more exciting to watch than Ross's as his jumps are high and very spectacular."

Montreal's Audrey Joyce was the winner of the junior women's figures, but she couldn't fend off a prodigious eleven year old from Ottawa named Barbara Ann Scott in the free skating and had to settle for second. Barbara Ann's performance included three Axels in a row and a double Salchow. 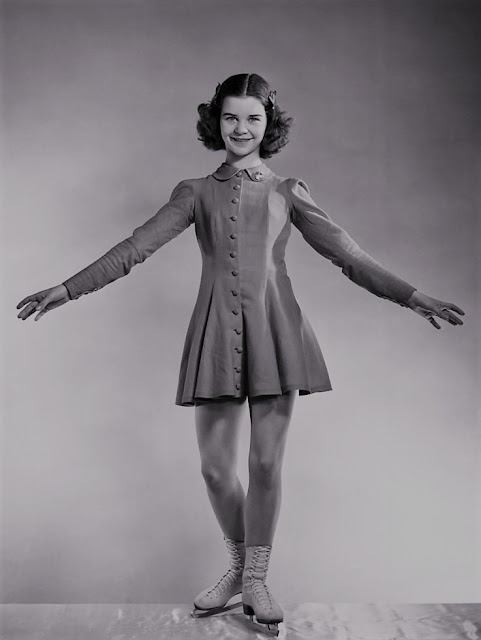 Barbara Ann had been only fifth the year prior in her first bid for the title and had been heartbroken when one of the judges actually laughed at her during the school figures. In her book "Skate With Me" she recalled, "[It] broke my heart, but I went back on the ice for the three-minute free skating determined to give him nothing to laugh at but my size, which I couldn't help... It seems strange to me now that I couldn't understand that being so young and small did make a difference in people's attitude toward me. Then I couldn't see how I was different from the others. We all did the same work at practice sessions; we all kept strict training; we all gave up the usual companionships and other interests that keep children and young people occupied so that we might advance in skill and make good showings in competition."

THE PAIRS, DANCE AND FOURS COMPETITIONS

There was only one entry in the fours event and the Toronto four of Ruth Hall, Elizabeth Chambers, William Calder and John Milsom took the title by default. It was the third year in a row that the Toronto four had placed first, but Ruth was the only returning member from the winning 1939 team.

There were two dance events in 1940 - the Waltz and the Tenstep. A field of seven was whittled down to four teams with an elimination round and both events were won by Minto couples - Aidrie and Donald B. Cruikshank repeated as Waltz winners, with Mrs. Elmore Davis and Melville Rogers taking the Tenstep. Melville, a former Canadian Champion in singles, pairs and fours, had the distinction of being the only skater to be both a judge and competitor in 1940. 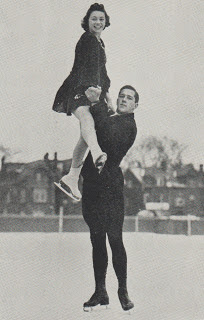 Toronto's Ralph McCreath had won the Canadian pairs title the past four years in a row - the first three years with Veronica Clarke and the latter time with Norah McCarthy. In 1940, Ralph and Norah easily bested Christine Newson and Sandy McKechnie and Eleanor O'Meara and Donald Gilchrist with unanimous first place marks... but their performance was not without incident. Ralph slashed Norah's leg during the performance but they continued on despite her injury.

After winning a record nine Canadian men's title, Montgomery 'Bud' Wilson had turned professional and the men's event in 1940 marked the changing of the guard. As Ralph McCreath had been runner-up to Bud in 1938 and 1939, no one was really surprised when he took the lead in the figures in Ottawa, but how much of a lead it was certainly turned heads. Seventy two points was nothing to scoff at! 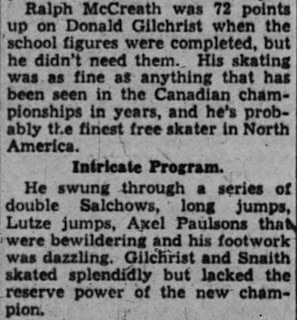 Ralph could easily have played it safe in the free skating and still won, but he went out and gave one of his finest performances ever, dazzling the audience with his speed, high-flying jumps and confidence. Joan Parkins remarked, "With all the ease in the world his Axel, double loop and Salchow jumps took him off the ice at breath-taking height and in these he alighted on the ice as light as a feather." He earned top marks for his performance and Donald Gilchrist and Wingate Snaith had to settle for second and third. 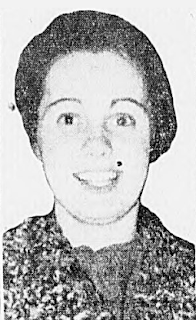 Seventeen year old Mary Rose Thacker of Winnipeg was the defending Canadian and North American Champion and the only skater west of Ontario to compete in Ottawa in 1940. She took a decisive lead of over twenty points in the figures. 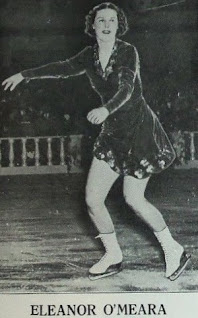 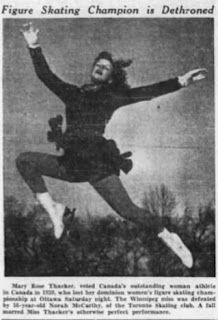 In the free skating, Mary Rose looked like she was on her way to defending her Canadian title until she fell on one of her jumps. Norah McCarthy came out and landed her Axels and 1936 and 1938 Canadian Champion Eleanor O'Meara, only fourth in figures, gave one of her finest performances to win the free skate. Reporter Walter Gilhooly recalled, "Eleanor O'Meara... gave, perhaps, the most appealing of all the ladies' singles performances. A knockout in dark red velvet, Eleanor skated with the utmost grace and free skating was really a revelation." 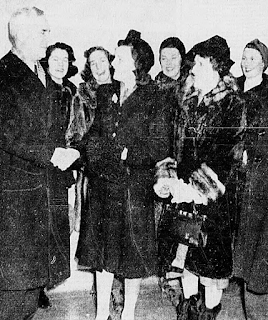 Norah McCarthy and Mary Rose Thacker each had two first place ordinals and two seconds, but Douglas Henry Nelles had Eleanor O'Meara first overall over Norah and Mary Rose... and it was that one third place that put Norah over Mary Rose. Eleanor settled for the bronze, ahead of Norah's sister Tasie and the Wilson sisters (Virginia and Eleanor) from Toronto. Tommy Shields recalled, "Judge Nelles' marks throughout the competition differed sharply from the other four. Experts could guess fairly confidentially what the average of the four would be, but never could forecast his. When he did award a five, which was not often, it was the signal for cheers from skaters and spectators. No doubt he called them as he saw them, but there was rarely any similarity to the marks of his colleagues... When the results were announced, there was a gasp of surprise and an appreciable moment of silence before Toronto supporters found their voices to cheer... Mary Rose took her defeat like a champion. There was no sign in her demeanor which would show how she must have felt her disappointment." Mary Rose told "Winnipeg Tribune" reporter Tony Allan, "If you fall in the free skating, you can't expect to win. Miss McCarthy skated very well, and I'm afraid I gave one of my bad performances."

Skate Guard is a blog dedicated to preserving the rich, colourful and fascinating history of figure skating and archives hundreds of compelling features and interviews in a searchable format for readers worldwide. Though there never has been nor will there be a charge for access to these resources, you taking the time to 'like' the blog's Facebook page at http://www.facebook.com/SkateGuard would be so very much appreciated. Already 'liking'? Consider sharing this feature for others via social media. It would make all the difference in the blog reaching a wider audience. Have a question or comment regarding anything you have read here? Have a suggestion for a topic related to figure skating history you would like to see covered? I'd love to hear from you! Learn the many ways you can reach out at http://skateguard1.blogspot.ca/p/contact.html.
Posted by Skate Guard Blog at June 08, 2021
Email ThisBlogThis!Share to TwitterShare to FacebookShare to Pinterest
Newer Post Older Post Home