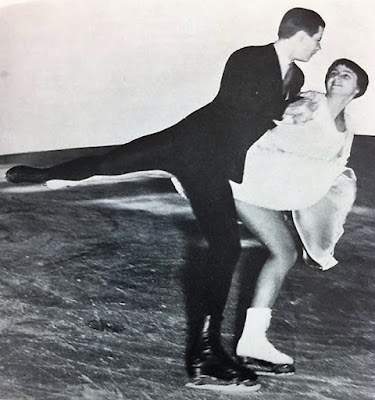 "If figure skating could be mastered easily it might become dull, but there is little danger of that." - George Hill, "Skating" magazine, May 1945

George 'Geddy' Edward Bellows Hill was born April 24, 1907 in Boston, Massachusetts. His father, Edward Burlingame Hill, was a noted composer who taught music to Leonard Bernstein at Harvard University. His grandfather, Henry Barker Hill, was a professor of chemistry and director of the Chemical Laboratory of Harvard College. His great grandfather, The Reverend Thomas Hill, served as Harvard's President from 1862 to 1865. Allison Bixby, George's mother, raised her three boys with the help of two nurses, a cook, a waitress and laundress. The Hill's resided on historic Brattle Street in Cambridge, Massachusetts - a street that even today is considered one of the most prestigious addresses in America.

Educated at the Noble and Greenhough School in Dedham and New Preparatory School in Cambridge in his youth, George found time between lessons to join both the Cambridge Skating Club and Skating Club of Boston. Surrounded by a who's who of the Boston skating scene at a time when the Continental (or International) Style was first 'taking hold' thanks to the efforts of his mentor George Henry Browne, he dabbled in everything from figures and free skating to fours and ice dancing.
Coached by Willie Frick, George claimed the Cambridge Skating Club's men's free skating title for the first time in 1925, when was eighteen years old. In the years that followed, he'd win the same title four more times, along with pairs titles with Clara Frothingham Rotch and Polly Blodgett and a Waltz title with his dear friend and future pairs partner, Maribel Vinson. 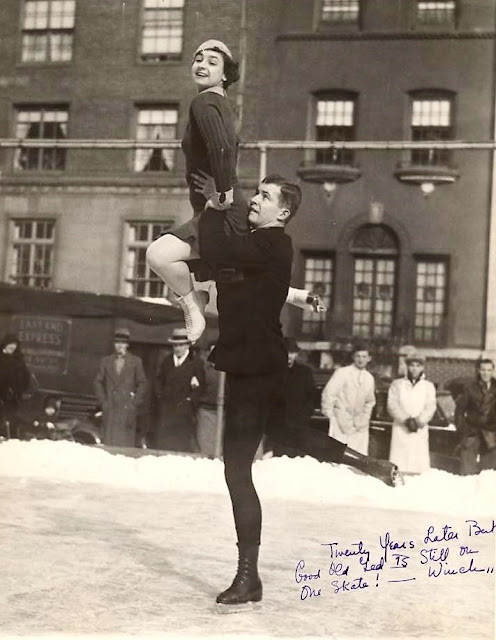 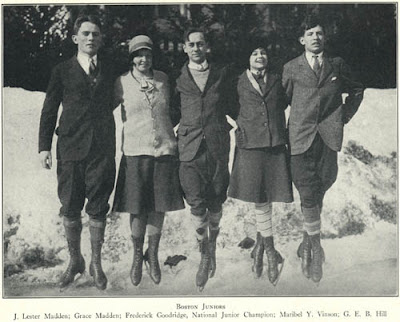 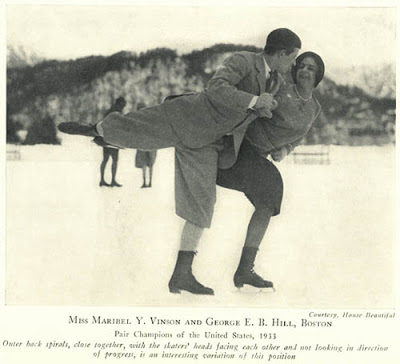 George represented the U.S. at two World Championships and the 1936 Winter Olympic Games in Garmisch-Partenkirchen, where he competed in both singles and pairs. He also claimed the Original Dance championship at U.S. Championships in 1930 and 1932 with Clara Rotch Frothingham, defeating a who's who of U.S. skating at the time, including Theresa Weld Blanchard and Nathaniel Niles, Beatrix Loughran and his own pairs partner, Maribel. When he won the 1930 Dance title, it was the first time Boston skaters had won an ice dancing title since 1922. His latter win with Clara moved Bedell H. Harned to proclaim that "it was the best combination of steps this contest has ever produced."

An impressive highlight of George's competitive career was the bronze medal he won at the 1934 U.S. Championships in Philadelphia. ISU historian Benjamin T. Wright noted, "Maribel was not there, having gone to England to train and also to compete in both the Worlds and Europeans (as an NSA member then), so she did not defend either her Senior ladies singles title or her Senior Pairs title with George, so he was left as a singles skater and actually got third in the senior men that year behind Roger Turner, the long time champion and Robin Lee, from Saint Paul, Minnesota who represented  the future. Hence the 'door was wide open' for Maribel's perennial rivals, Suzanne Davis in Senior ladies singles and Grace and James Madden in Senior pairs, to enjoy their 'moments of glory', which they did. Suzanne had also won the Senior original dance event with Goodridge in 1933, so competed in that again in 1934 and also in a Boston four consisting of herself, Theresa Weld Blanchard, Goodridge and Richard Hapgood. In the end the representatives from The Skating Club of Boston won seven out of the eleven titles in play. No other club to my knowledge has ever achieved that domination in a Nationals as in 1934, and yet it was in effect by the 'second string', a remarkable accomplishment." 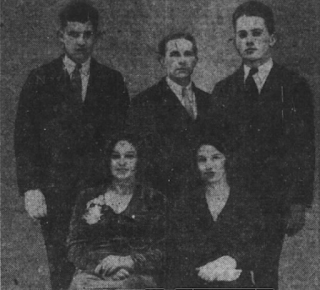 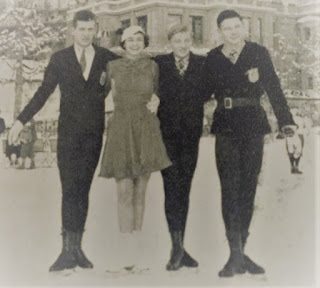 When Maribel went overseas to England to train, George, James Madden and Willie Frick followed suit for a time. They gave two 'All American' shows in London, in which George dazzled audiences with his free skating program, which included spread eagles and jumps in both directions. 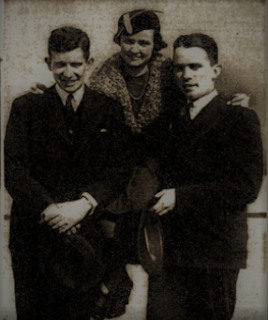 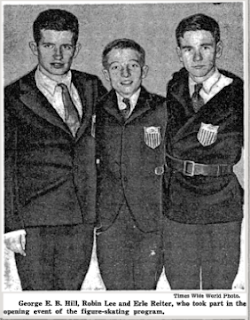 George and Maribel pioneered the Hope Chest Lift - a "lift in which the man raises the girl directly in front of him and 'hopes' he can get her at least as high as his chest." They also developed a spiral that became known for a time in the Western States as the 'Vinson-Hill spiral'. Maribel described it thusly:  "Skate fast, turn a left mohawk in reverse rotation onto a LOB edge, side by side, the girl on the inside track, the man's left arm around her waist, right hands clasped to the side, heads looking in toward each other - and there you have it. Speed and lean over a well-bent skating knee are of the essence." Maribel also had nothing but praise for her partner's signature move: "Geddy Hill...does without shadow of doubt the finest half-loop jump I have ever seen - and I have seen all the world's greatest skaters during the past dozen years. Ged gets his tremendous 'rise' by the fling of his free leg backward and upward as he takes off; the great distance his jump covers comes from the speed with which he goes into it. As he lands, his free leg passes close by his skating leg into a high extended position and he bends his skating knee very deep, by adding an arched back and well-checked arms held easily away from his body, Geddy sails away from his jump in a beautiful inside back spiral." 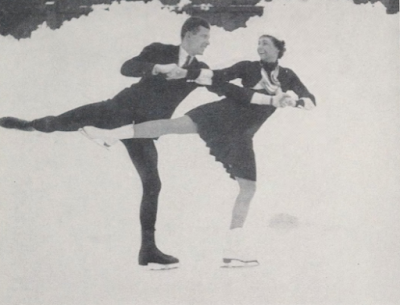 One of George's other signatures was a popular carnival act with James Madden... 'Pansy' the skating Russian pony. 'Pansy' had audiences in stitches all over the Eastern Seaboard. Richard L. Hapgood recalled how Joseph K. Savage's wife had told him "it nearly broke her heart" when an eighty piece symphony orchestra was asked to play "Horses" at the Skating Club of Boston's carnival for Madden and Hill. The black-tie orchestra had played Wagner in the first half. 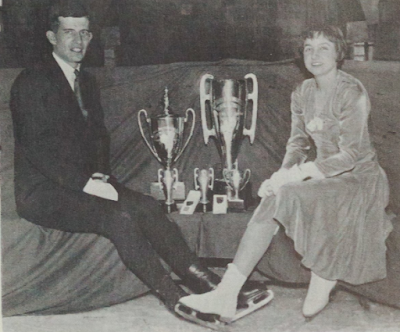 Impressively, George followed in his father, grandfather and great grandfather's footsteps, graduating with a fine arts degree from Harvard College in 1933. While attending Harvard, he was a member of the Speakers' Club and the controversial Phoenix-S.K. Club. He attended Harvard Architectural School for two years but his studies were interrupted by the Winter Olympic Games in Garmisch-Partenkichen. 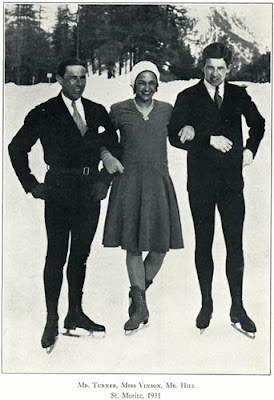 In 1937, George transferred to the Massachusetts Institute Of Technology, where he received an architectural degree. Quoted in the Harvard College Class Of 1933 Quindecennial Report in May 1948, he recalled, "After this I settled down to become the world's greatest architect only to have World War II and time alter this ambition. During the war I was a Naval Architect at Charlestown, Mass. - a good excuse for a 4 F'r. I survived thanks to my wife and children. At the end of the war I moved to California, an unheard-of-act for a dyed-in-the-wool New Englander. True to all expectations, California is wonderful and so is New England." By the fifties, George was well established in Marin, California with his wife Leslie (Eustis) and three children, running his own architectural office. In 1958, he admitted, "I am becoming a renovation expert and do any kind of work from dog-houses to palaces." 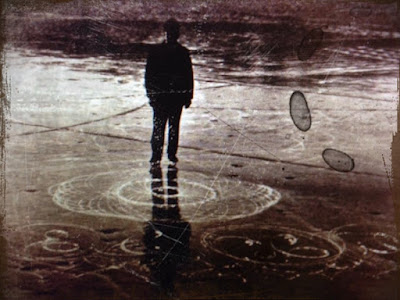 George was devastated by the death of his dear friend and partner Maribel Vinson Owen in the 1961 Sabena Crash. The tragedy struck just a year after he'd buried his father. He attended a memorial for the Owen's held at St. Clements Episcopal Church in Berkeley, California. Many of Maribel's friends and former students were in attendance, and he was visibly moved by the service. 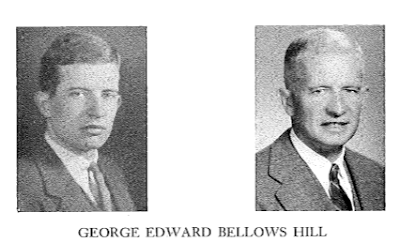 Later in life, George played tennis and golf and held memberships with The Harvard Club and Lagunitas Country Club. A devout Episcopalian, he was a Life Trustee at Grace Cathedral of San Francisco and Vestryman emeritus at St. John's Church in Ross. As for his politics, he unapologetically proclaimed, "I am a strong Republican in an area dominated by strong Democrats who have little effect on me." His hobbies included collecting records and stamps, but he admitted, "One of my greatest pleasures is working in my garden of flowers and vegetables. It has a very stabilizing effect on my soul and body."
George passed away on May 7, 1992 in Marin, California at the age of eighty five. He was inducted posthumously to the U.S. Figure Skating Hall Of Fame 'along side' his partner, Maribel, who had already been inducted in 1976.
Skate Guard is a blog dedicated to preserving the rich, colourful and fascinating history of figure skating. Over ten years, the blog has featured over a thousand free articles covering all aspects of the sport's history, as well as four compelling in-depth features. To read the latest articles, follow the blog on Facebook, Twitter, Pinterest and YouTube. If you enjoy Skate Guard, please show your support for this archive by ordering a copy of the figure skating reference books "The Almanac of Canadian Figure Skating", "Technical Merit: A History of Figure Skating Jumps" and "A Bibliography of Figure Skating": https://skateguard1.blogspot.com/p/buy-book.html.
Posted by Skate Guard Blog at April 22, 2021
Email ThisBlogThis!Share to TwitterShare to FacebookShare to Pinterest
Newer Post Older Post Home