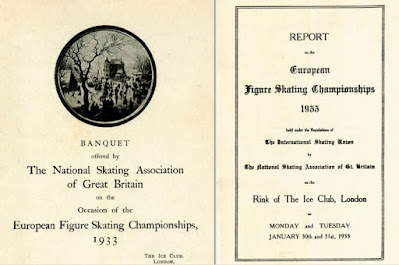 They reclined in parlours with their reading glasses, cup of tea and Agatha Christie's new Poirot mystery "Peril at End House" and cut up a rug to Ethel Waters' rendition of Irving Berlin's new hit song "Heat Wave". The year was 1933 and cautious optimism was in the damp winter air. Great Britain was slowly starting to show signs of recovery from the Stock Market Crash of 1929 in New York which sparked a global economic recession that left thousands in England unemployed.
On January 30 of that year, the same day Germans witnessed Adolf Hitler being sworn in by German President Paul von Hindenburg as Chancellor of Germany, many of Europe's top figure skaters gathered at the Westminster Ice Club in London for the first day of the first European Championships in history held in England. Let's take a look back at how things played out! 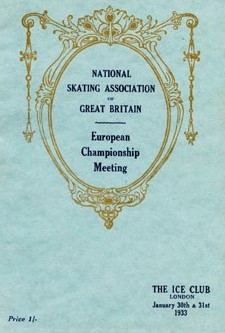 Olympic Gold Medallists Andrée (Joly) and Pierre Brunet opted not to enter, essentially making the competition a two-way race between two Austrian pairs - Idi Papez and Karl Zwack and Lilly (Scholz) Gaillard and Willy Petter. Gaillard had won an Olympic silver medal with her former partner Otto Kaiser and finished second with Petter the previous year at the European Championships, but had lost that year's Austrian title to Papez and Zwack, who won the bronze at Europeans the year prior. 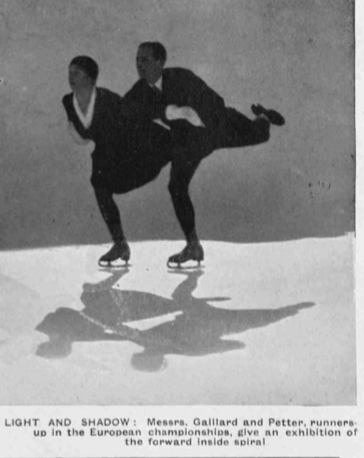 Four judges placed Papez and Zwack first, while the Austrian judge tied them with their teammates Gaillard and Petter. Mollie Phillips and Rodney Murdoch were unanimously third, defeating Violet (Supple) and Leslie Cliff of Bournemouth and Mrs. and A. Proctor Burman of Manchester. The "Wiener Sporttagblatt" noted, "The equivalence of both Viennese couples made the smallest mistakes crucial... The circumstance [set up a scenario] where the two rivals [might] demolish [each other] but it was not like that. Both couples were in top form [and skated] at full speed. The effect was gorgeous.... In Vienna, the supporters of the couples have formed two camps - by the way just as in London - and it was somewhat surprising [the judges] put Papez-Zwack in first place... Maybe their success in the Austrian championship increased their confidence." 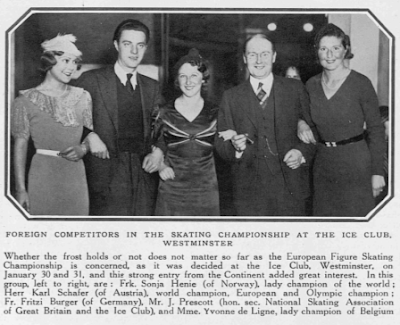 As in the pairs event, there were only five entries - probably owing to the fact that the event was held in England less than three weeks before the World Championships in Zürich. It would have made more sense to some to arrive early in Switzerland and train in St. Moritz or Davos in the weeks leading up to Worlds. As expected, Olympic Gold Medallist Karl Schäfer won the figures by a wide margin, but not unanimously. German judge Artur Vieregg voted for the lone German man competing, Ernst Baier, who placed second. Erich Erdös of Austria, Jean Henrion of France and William M. Clunie of Great Britain rounded out the five man field. In the free skate - and overall - Schäfer, Baier and Erdös were placed unanimously first, second and third - one of the few instances during that period that a panel was able to agree on something! 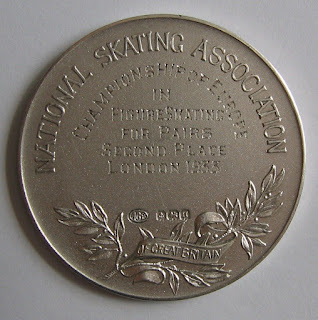 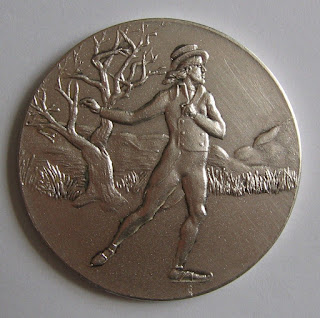 The "Wiener Sporttagblatt" noted, " Karl Schäfer would not have even needed to skate to his peak, but he actually had one of his greatest days. He was quite faultless. Every second, every one movement and jump made his presence felt... This time he even surprised his friends. His beautiful and easygoing attitude, his calm and general mastery has a counterpart, and that is Sonja [Henie]. With the nonchalance of his difficult program and its compelling structure [he] withstood the sharpest criticism... The Berliner's Baier's compulsory exercises were almost a fiesta of mistakes and his freestyle did not yield the difficulties of Schäfer's but was quite effectively [put together]. Despite his youth, Erdös has already connected himself with the international master class.  It is noteworthy that the Berliner had a pleasing, Viennese soft - but almost too feminine - style and that [Erdös] had a powerfully male style." 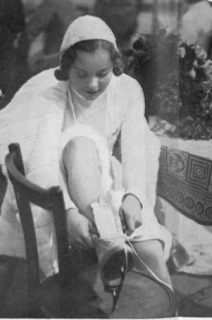 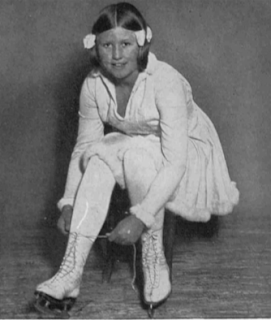 To the surprise of absolutely no one, then two time Olympic Gold Medallist Sonja Henie dominated the competition from start to finish, placing unanimously first in both figures and free skating. The
"Wiener Sporttagblatt" noted that she was "nervous but well-controlled in the compulsory exercises but in the freestyle her pirouettes were racing, their stopping more precise than anyone else. The Axel she landed and her zigzag steps were so lightning fast that she swirled over the ice."


In the figures, three judges had twelve year old Cecilia Colledge second. Hilde Holovsky and Fritzi Burger received the other two second place ordinals. Colledge's success was considered quite the shock as she had placed only eighth the previous year's Olympics and World Championships. In the free skate, the Austrian judge tied Holovsky with Henie. With thirteen ordinal placings, Colledge took the silver. Burger and Holovsky tied in ordinal placings but Burger was awarded the bronze based on her point total. Belgium's Yvonne de Ligne and Austria's Liselotte Landbeck rounded out the top six. Colledge, who skating on home ice received even more applause than Henie, made history as the first British woman to medal at the European Championships. 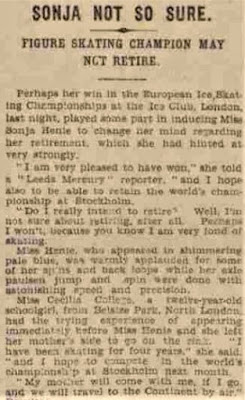 The marks of the British judge were highly out of line with the other judges. He had Gweneth Butler, the British skater who placed ninth, third in the figures. The Austrian and Norwegian judges had her seventh and ninth. Not to be accused of national bias, he was the only judge to place Cecilia Colledge down in fourth in the free skate! The British judge also placed Hilde Holovsky ninth in figures, while the Austrian and Norwegian judges had her in the top three. 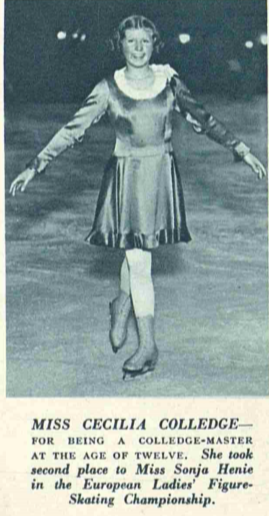 Interestingly, it was at the Westminster Ice Club that Cecilia Colledge had first seen Sonja Henie skate, when she was only seven years old. The day after the event concluded, a reporter from the "Daily Mirror" went to go visit her at home. They found her sitting in front of the fire surrounded by her dolls. She told them, "I wasn't a bit excited when I took my turn yesterday. I had been practising on another rink about a quarter of an hour before I had to go on, so I didn't really have time to get nervous. Tomorrow we are going back to Switzerland, where I have been since Christmas. I came home only for a few days so that I could compete in the championship."
THE WALTZING COMPETITION
Twenty-one years before the first official European Championships in ice dancing, an international waltzing competition was a popular conclusion to the Championships in London. Competitors skated in a circular pattern around chairs placed on the ice. The top three couples were Ethel Muckelt and Ronald D. Gilbey, Violet Supple and Leslie Cliff and Betty Meakin and Jackie Dunn. Muckelt, the Cliff's and Dunn would all represent at Great Britain at the Olympics.

Skate Guard is a blog dedicated to preserving the rich, colourful and fascinating history of figure skating and archives hundreds of compelling features and interviews in a searchable format for readers worldwide. Though there never has been nor will there be a charge for access to these resources, you taking the time to 'like' on the blog's Facebook page at http://www.facebook.com/SkateGuard would be so very much appreciated. Already 'liking'? Consider sharing this feature for others via social media. It would make all the difference in the blog reaching a wider audience. Have a question or comment regarding anything you have read here or have a suggestion for a topic related to figure skating history you would like to see covered? I'd love to hear from you! Learn the many ways you can reach out at http://skateguard1.blogspot.ca/p/contact.html.
Posted by Skate Guard Blog at September 16, 2021
Email ThisBlogThis!Share to TwitterShare to FacebookShare to Pinterest
Newer Post Older Post Home