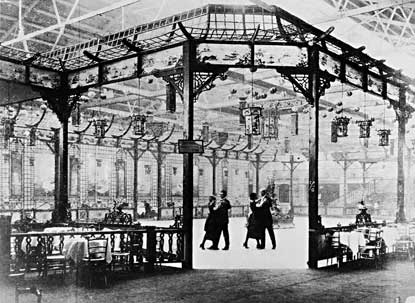 No journey into figure skating history would be complete without discussing the Hammersmith Ice Drome in London and its role in bringing skating from the classes to the masses.

In the early twenties, Claude Langdon (who you'll remember from the "King Bat Of The Forest" blog back in October 2015) bought a rather "sad [dance] hall" called the Palais de Dance at Hammersmith with the goal of giving the "little man" a chance to skate. In converting the dance floor to a skating rink between 1924 and 1927, he discovered that the ancient foundation was built over an ancient well and part of an old farmyard. The reconstruction of the floor into an ice rink - as well as putting in new seating and furnishing - turned out to be a very expensive affair. With the support of friend Captain T.D. Richardson, the rink opened in 1929 with a 'Funk' floor using chippings of coiled steel in the base of the rink and it wasn't long before skaters like Richardson, Howard Nicholson and Trudy Harris were taking the ice there.

Ice skating carnivals had been attempted in a smaller scale at the Duchess of Bedford's Princes Club, Hengler's and the Niagara rinks but these festivities pandered to those with deep pockets, not the masses. If you skated at the Westminster Ice Club, the temporary ice rink in the basement of the Albert Hall or the Park Lane Ice Club at Grosvenor House, you had money, a title or both. Langdon was insistent that the ice at Hammersmith be accessible to everyone - from royals to ragamuffins.

In his 1953 book "Earl's Court", Langdon recalled how ice carnivals got their start at the Hammersmith in the early thirties: "On our ice I coined the idea of the Ice Carnivals, which had a big society following, and were widely taken up by the Press. It was the first time such a thing had been organized on indoor ice anywhere in the world. There were great occasions when at gay parties we roasted oxen whole on the ice; the Duke of Windsor (then Prince of Wales), Sir Samuel Hoare, Lord Lytton, Lord Jellicoe and others were among our guests... There were many attractions to bring the ordinary man and his wife to the ice, even if they could not skate, as well as to interest the wealthy and discerning skaters who otherwise patronized the Westminster Ice Club and Grosvenor House."

Sonja Henie and Cecilia Colledge even came there to practice and give exhibitions. The "London Star" reported that on one such occasion "the principal attraction was little Cecilia Colledge, who is now lady champion of Great Britain and quite apart from her artistic athletics is one of the most beautiful girls in the Kingdom. Cecilia devotes her life to skating. She spends hours on the ice daily either at Westminster or Hammersmith. The rhythm and grace of her movements are a perfect delight, and Continental experts who watched her exhibition performance at the Hammersmith rink assure me that within the next two years this accomplished Marylebone child (for she is little more than that) is likely to win the world championship." As we all know, this prediction eventually proved correct.


In 1934 at the height of the rink's popularity, Langdon gave his staff the day off, hired a pleasure-steamer and took them on a cruise down the Thames. It was then that his business partner, A.C. Brake, broke the news: "Ladies and gentlemen, I can assure you that, although you may have heard rumours to the contrary, we are definitely not abandoning ice entertainment. Mr. Langdon may decide to extend his interests in dancing and the palais, and perhaps he will be able to extend his interest in ice entertainment, too. But you who are expert in matters of the ice rinks need have absolutely no fear of your jobs. I give you my word." His word was good.

Though the Hammersmith Ice Drome once again became a dance hall, Langdon went on to reform the Richmond rink as a sports centre accessible to all Londoners, stage lavish ice spectacles in Brighton and establish the Empress Hall in Earl's Court. His stories of working with a who's who of the figure skating world including T.D. Richardson, Papa and Sonja Henie, Cecilia Colledge, Megan Taylor, Jeannette Altwegg and Belita are nothing short of epic and if you are as fascinated by The Hammersmith and its role in skating history as I was, you just may want to read his book.