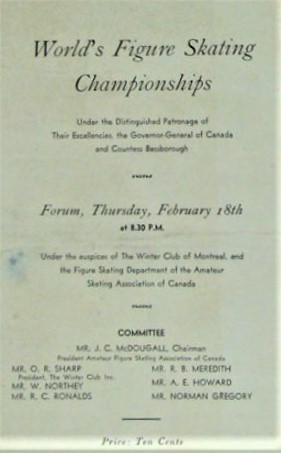 From the magical masquerades at the Victoria Skating Rink to Louis Rubenstein, the city of Montreal has long played an important role in Canada's rich figure skating history. There really couldn't have been a better place to host the first World Championships on Canadian soil. The decision to host the 1932 World Championships in Montreal was made at the June 1931 ISU meeting. Although a great 'get' for the Amateur Skating Association Of Canada, the allocation was actually in one way quite bittersweet. Rubenstein had helped found what was then Canada's governing body for skating and served as its President until 1930 and had passed away in January of 1931, missing hearing the incredible news by mere months. 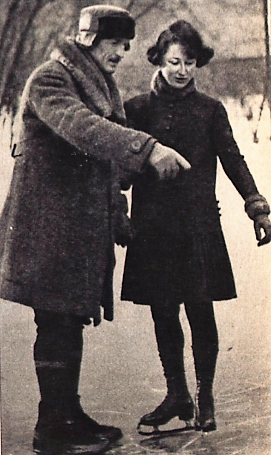 Fritzi Burger practicing with coach Pepi Weiß-Pfändler
Many European skaters who had competed at the Lake Placid Olympics simply remained in America following the conclusion of those Games, gave exhibitions then hopped a train to Montreal to compete at the World Championships, which was held from February 17 to 20, 1932. The same seven judges from Austria, Canada, Finland, France, Great Britain, Norway and the United States were used for all three disciplines and two different venues were utilized. The Montreal Winter Club on Drummond Street played host to the school figures, while free skating events were held at the Forum". On February 14, 1932, "The Rochester Democrat and Chronicle Sunday" reported, "Canadian admirers of figure skating are confident that the entrants from Ottawa, Toronto, Montreal and other Canadian skating centers will be placed well in the various events in which they will meet world famous exponents of the graceful art to which (and not to dancing, as it is generally believed) the words, 'the poetry of motion' were first applied." Ultimately, more than twelve thousand spectators flocked to the Forum to take in the free skating competitions that year and the competitors did not disappoint. 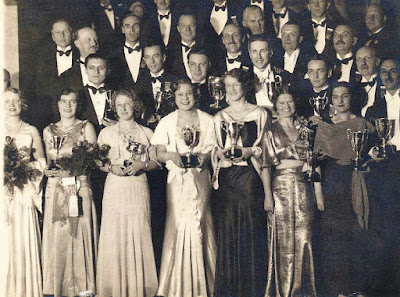 A who's who of figure skating at the 1932 World Championships. Photo courtesy Archives de Montréal.

Fresh off their second Olympic gold medal, France's Andrée and Pierre Brunet won their fourth and final World pairs title with first place ordinals from five of the seven judges. In typical nationalistic fashion, Emília Rotter and László Szollás finished second with the first place vote of the Hungarian judge and Beatrix Loughran and Sherwin Badger were third with the first place vote of the American judge. Canada was unsurprisingly the best represented country in the event, boasting four teams. Frances Claudet and Chauncey Bangs, Constance and Bud Wilson, Maude Smith and Jack Eastwood and Isobel and Melville Rogers all rounded out the lower tier of the results. America's second entry, Theresa Weld Blanchard and Nathaniel Niles, finished a disappointing eighth with last place ordinals from three judges. Even American judge Joel Liberman had them eighth. It was the duo's final appearance in a major international competition. 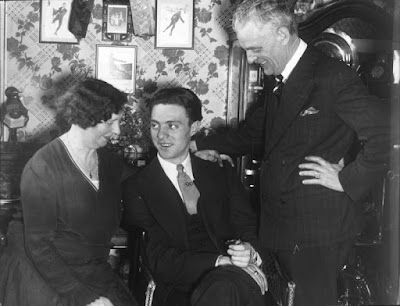 Karl Schäfer with his parents in 1932. Photo courtesy Bildarchiv Austria.

Gillis Grafström, fresh off his defeat in Lake Placid, opted not to compete in Montreal. The man who'd beaten him, Austria's Karl Schäfer, became the second winner from Lake Placid to follow up his Olympic gold medal with a victory in Montreal. The class of the field, the elegant skater from Vienna dominated the men's event from start to finish, earning first place votes from all seven judges in both figures and free skating. Likewise, the judges were in total agreement that Bud Wilson of Canada was a clear number two. He earned second place votes in both figures and free skating from every judge and became the first man from Canada to win a medal at the World Championships that year.

The battle for bronze was a different affair entirely. Finland's Marcus Nikkanen was third in the school figures, followed by Roger Turner of the United States and Ernst Baier of Germany. When a second American, Jimmie Madden, turned in a brilliant free skate, Nikkanen and Turner lost valuable ground and Baier was able to swoop in and snatch the final spot on the podium.

The men's event in Montreal marked the first appearance of Japanese skaters at the World Championships. Kazuyoshi Oimatsu and Ryoichi Obitani finished seventh and eighth. Obitani recalled his anxiety about competing in Montreal in "Skating" magazine thusly: "I was disheartened at the Olympic Games and thought I never would be able to stand the World's Championships, but remembered that I was far from Japan and if I did not enter it would leave a bad record in my young days. These feelings made me suffer more than the training and I wanted to go away in the woods and forget. I could not sleep and felt as if I was carrying the burden of the world. Every time I came back from practicing I lay on my bed and wondered if I should appear or default, and I could not sleep a wink. After suffering for a week, I gathered courage and told our manager the night before we left for Montreal that I would enter." 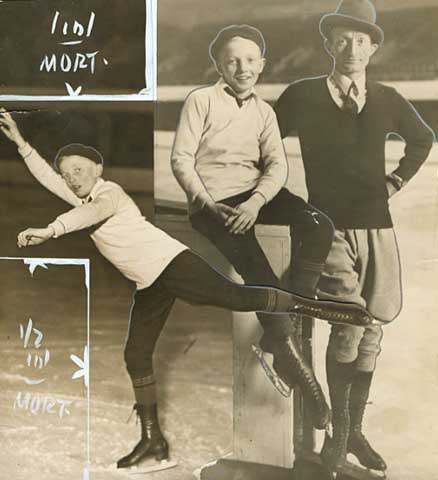 A third American entry, thirteen year old Robin Lee of Minneapolis, placed ninth. Though extremely young female competitors were becoming the norm in international figure skating competitions at the time, Robin Lee was one of the first men since Sweden's Gösta Sandahl (pre-World War I European and World Champion) to enter the international ranks as a pre-teen. 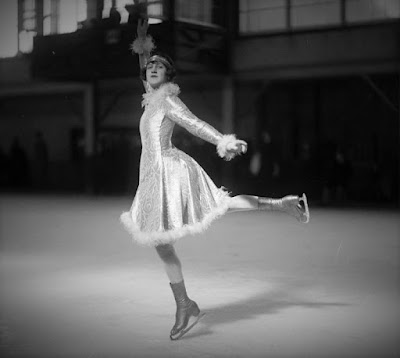 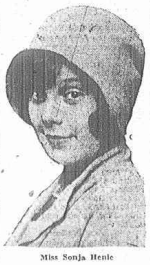 In the women's event, Sonja Henie won the school figures with first place ordinals from eight judges. British judge Herbert J. Clarke dared to place the Norwegian skating queen in third behind Maribel Vinson and Constance Wilson... and we can be quite certain that didn't go over well with Papa Henie and friends. Clarke changed his tune in the free skate, which Sonja won unanimously on the road to her sixth World title. Austria's Fritzi Burger was second with three second place ordinals. Only two points behind in third was Constance Wilson, with one second place nod from Canadian judge Norman Mackie Scott. Maribel Vinson, with two seconds from the American and British judges, was fourth. The final second place ordinal - from one of the two Scandinavian judges on the panel - went to Sweden's Vivi-Anne Hultén, who placed fifth. Merry murderess Yvonne de Ligne was sixth, Megan Taylor seventh, Cecilia Colledge eighth and Mollie Phillips ninth. Canada's other two entries, Elizabeth Fisher and Mary Littlejohn, both had disappointing showings, placing outside of the top ten. 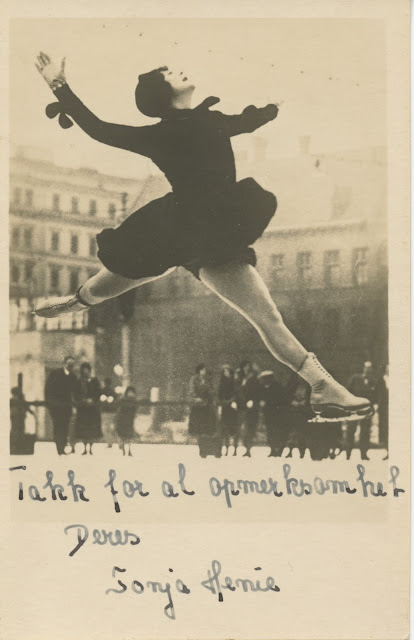 Prior to the competition, Sonja Henie had been invited to skate in two Canadian club carnivals before she left Europe, but claimed her father declined, unsure of how tired she'd be after the Games. The trans-Atlantic wires allegedly became crossed and the Canadian clubs advertised that she would be headlining their carnivals... to the outrage of the Henie's. When Papa Henie told both clubs no after they had already advertised she would appear, Canadian newspapers began printing stories claiming that Papa had demanded huge appearance fees and that Sonja was "pretending to be an amateur." As an example, Toronto Skating Club President Donald B. Cruikshank told reporter Bob Stedler, "We flatly refused to become a party to what we believed was a straight holdup on the part of one claiming to be an amateur in sport. It would have been unfair to the other European skaters on our program to have acceeded to the proposition put to us by Miss Henie's father. If Miss Henie had wanted to turn professional, we would have been quite willing to deal with her or Mr. Henie. Both the Toronto and Ottawa clubs are aware of her worth as a box office attraction." In her book "Wings On My Feet", Sonja recalled, "If anyone wants to know what it is like to feel dreadfully sick without a physical cause, I recommend such a situation. I left Canada determined never to go back, but of course that was impulse, and in recent years I've not only gone back but had many happy weeks in all parts of the Dominion."

Skate Guard is a blog dedicated to preserving the rich, colourful and fascinating history of figure skating and archives hundreds of compelling features and interviews in a searchable format for readers worldwide. Though there never has been nor will there be a charge for access to these resources, you taking the time to 'like' on the blog's Facebook page at http://www.facebook.com/SkateGuard would be so very much appreciated. Already 'liking'? Consider sharing this feature for others via social media. It would make all the difference in the blog reaching a wider audience. Have a question or comment regarding anything you have read here or have a suggestion for a topic related to figure skating history you would like to see covered? I'd love to hear from you! Learn the many ways you can reach out at http://skateguard1.blogspot.ca/p/contact.html.
Posted by Skate Guard Blog at December 14, 2017
Email ThisBlogThis!Share to TwitterShare to FacebookShare to Pinterest
Newer Post Older Post Home