On The Blue Danube: The Idi Papez and Karl Zwack Story 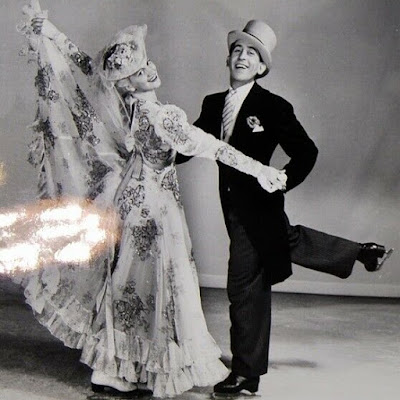 Ida 'Idi' Papez and Karl Zwack were born in Vienna, Austria three years apart - he on September 11, 1906 and she on February 7, 1909. Their upbringings couldn't have been any more different. Idi grew up in a middle class Roman Catholic family, while Karl came from a wealthy Jewish family that emigrated from Czechoslovakia to Austria. He grew up in Leopoldstadt, a predominantly Jewish suburb of Vienna. One of his ancestors was Dr. József Zwack, the Royal Physician to the Habsburg Court, who had invented an alcoholic health tonic that the royalty and nobles were all wild over. Genealogist Roy Grant noted, "The Zwack's prospered and their families followed the social scene by migrating to nearby capital cities. One side went into banking and moved to Vienna, another stayed with producing the tonic on a commercial basis and settled in Budapest. Either way, from then on the Zwack's and their descendants were always comfortably off."

Idi and Karl were playmates as children and started skating together as youngsters at a neighbourhood rink when she was six and he was nine. They didn't begin pursuing competitive skating seriously until they were in their late teens, their first big win being the Austrian junior pairs title in Innsbruck in 1929. After finishing second to Lilly (Scholz) Gaillard and Willy Petter in the senior pairs event at the Austrian Championships in 1930, they made their debut at the European Championships, placing a creditable fifth. That same year, they placed second at an international competition in Opava behind Olga Philipovits and Rudolf Dillinger. 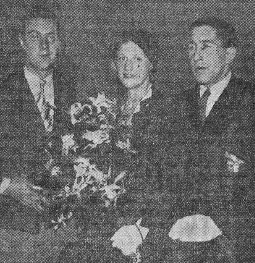 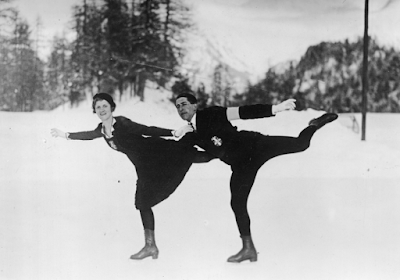 Arguably, Idi and Karl's greatest success was their win over Gaillard and Petter at the 1933 European Championships in London. In the years that followed, they disappointingly finished second at two European and two World Championships. All but one of those losses was by the narrowest of margins. Two were three/two splits of the judging panel and at the 1933 World Championships, they also lost by a mere tenth of a point. Hungarians Emília Rotter and László Szollás won three of those four titles; the 1935 European title win going to Germans Maxi Herber and Ernst Baier. 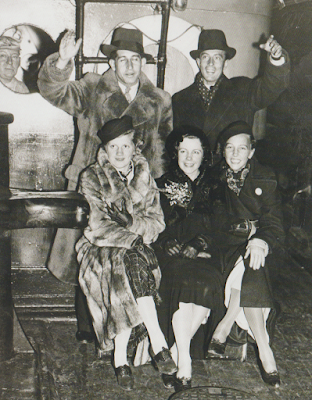 As one might predict, the Austrian press more than once stated Idi and Karl were underscored and received "the widest applause". It was an injury - not the frustration over finishing second time after time - that ended Idi and Karl's competitive career. Idi broke her arm in the months leading up to the 1936 Winter Olympic Games in Garmisch-Partenkirchen and another talented Austrian team, Ilse and Erich Pausin, won the silver medal that by all intents and purposes should have been theirs.


At only five foot six, Karl wasn't the typical 'pair guy', even for that era. Yet he and Idi developed a reputation from Paris to Prague as one of the more athletic couples of the period. Idi once told an American reporter, "We invented adagio on ice, were the first to put acrobats on ice, created a great controversy in Europe as newspapers demanded, 'Is that dance skating or circus?'" While Idi's claim wasn't exactly true - there were a number of professional pairs who had performed adagio lifts earlier - she and Karl were certainly one of a handful of pairs who played an important role in making amateur pairs skating more athletic in the thirties. They showcased their 'big tricks' in exhibitions in Austria, Germany, Holland, France, Great Britain, Italy, Hungary, Switzerland, Norway, Sweden and Denmark. 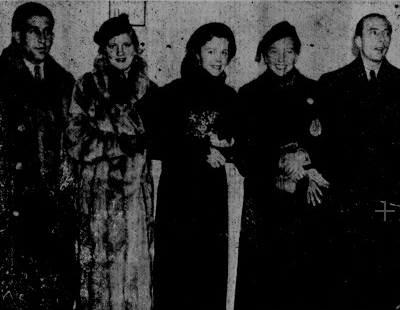 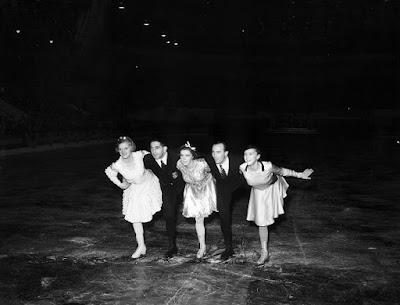 From 1935 to 1937, Idi and Karl made three trips to the United States to appear in carnivals at Madison Square Garden and the Chicago Stadium. While abroad, they sent postcards and letters to the "Illustrierte Kronen Zeitung" detailing their American adventures. Neither Idi or Karl knew any English at this point and relied heavily on English-German dictionaries, so Ernst Baier and Vivi-Anne Hultén acted as interpreters for the group of European skaters who participated. The first of these trips resulted in a minor scandal, when the British delegates to the ISU alleged that Idi and Karl, Maxi Herbert and Ernst Baier, Vivi-Anne Hultén and Sonja Henie had violated 'Rule 3, Section 2' of the ISU rulebook, which stated "that no visiting skater may receive more than second-class fares and incidental expenses not exceeding 20 Swedish kroner." At the ISU Congress in Stockholm, the powers that be dismissed the charges. 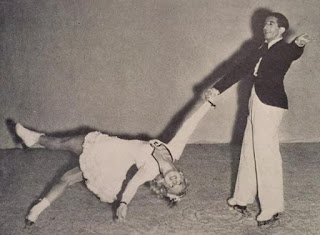 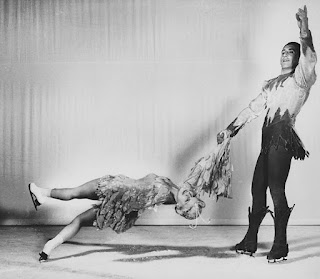 On their final trip to America, Idi and Karl met the Shipstad brothers, who were busy organizing their brand new tour - the Ice Follies. Idi recalled, "We had hardly returned home and unpacked when they sent us a wire asking us to join the show. We decided to accept." Skiing champion Sepp Ruschp remembered meeting Idi and Karl on an express train through Hamburg, when they were enroute to America: "I went to the first class car (I was travelling third class) and was introduced to the two skaters - beautiful girl and young man. We quickly became friends, and spent much of the train ride chatting. Because we were three nationally known sport figures, we were allowed to travel together. I got out and walked when the train stopped at Regensburg and other cities, but I noticed they never left their car. Finally I went back in and asked, 'Don't you want some fresh air?' 'My dear friend,' Karl said, 'I'm Jewish. Ida is not but I am and I'm scared stiff. I won't take one step out there until I am on my way to the boat.' He said he would feel more at ease once the boat departed." 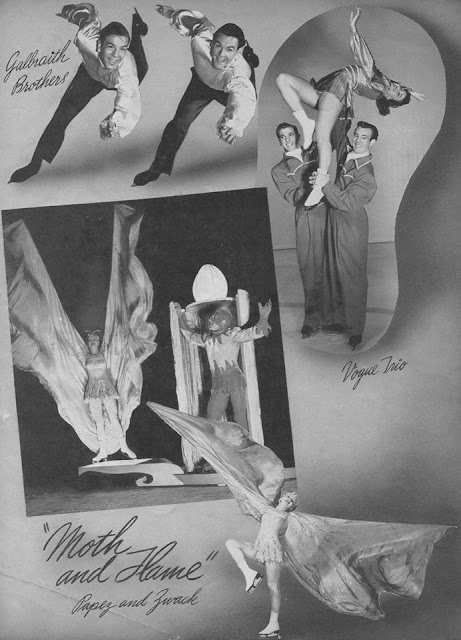 Idi and Karl arrived in America safely and toured with the Ice Follies throughout World War II. They were the first European skaters to join the show. Idi recalled, "I remember our first visit to San Francisco. We were all so excited, and so were the people here. Some came to see that first show five or six times." Impressed by her legs, one reporter dubbed Idi "The Marlene Dietrich Of The Ice". Their theatrical number "The Moth And The Flame", where she wore wings, was a big hit with American audiences and they were lauded for their 'Old World charm' in their signature number to Strauss' "Blue Danube" waltz. 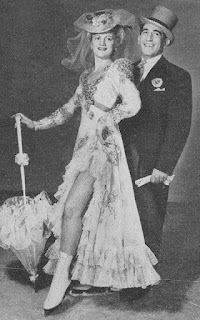 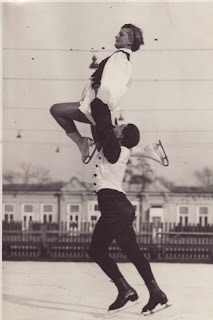 Though their smiles never gave it away to the audiences in the Ice Follies, life off the ice for Idi and Karl wasn't all roses. Prior to leaving for America, Idi had married Adolf Eder, then Secretary of the Wiener Eislaufverein. The plan was for her to go America "to smooth the way for Karl's possible escape." The couple ultimately divorced and Adolf went on to serve as Secretary of the Österreicher Eislaufverband from 1947 to 1958 and manager of the Karl Schäfer and Wiener Eisrevues. Idi remarried to San Francisco's Gordon Horatio Chick, owner of Chick's Bootery, on April 24, 1945. Karl had married a New Yorker named Gertrude Goldie Milstein who moved with her family to Vienna in June of 1934. He was naturalized as a U.S. citizen in the summer of 1939. Along with countless other Jewish people living in Vienna, Karl's parents were rounded up by the Nazis. They were both sent to the Theresienstadt ghetto in Terezín, northwest of Prague - a transit station on the way to the extermination camps. His mother Olga didn't survive Theresienstadt; his father Gustav didn't survive the final leg of his journey - the gas chambers at Auschwitz. 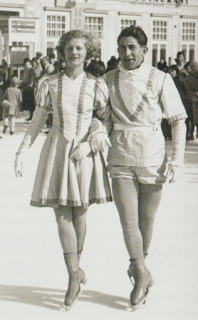 Retiring from the Ice Follies in 1945, Idi and Karl both stepped away from the skating world. Karl settled in New York and raised a family and Idi lived out her days in a two million dollar home in Twin Peaks, San Francisco with her husband and chihuahua Brunnhilde. In 1966, Idi told a reporter from the "San Francisco Examiner", "I haven't skated since I was married. I always thought: when you quit, you quit. You can't hang on to something." Karl passed away in August of 1984 at the age of seventy seven; Idi on October 12, 1997 at the age of eighty eight.

Skate Guard is a blog dedicated to preserving the rich, colourful and fascinating history of figure skating. Over ten years, the blog has featured over a thousand free articles covering all aspects of the sport's history, as well as four compelling in-depth features. To read the latest articles, follow the blog on Facebook, Twitter, Pinterest and YouTube. If you enjoy Skate Guard, please show your support for this archive by ordering a copy of the figure skating reference books "The Almanac of Canadian Figure Skating", "Technical Merit: A History of Figure Skating Jumps" and "A Bibliography of Figure Skating": https://skateguard1.blogspot.com/p/buy-book.html.
Posted by Skate Guard Blog at November 05, 2020
Email ThisBlogThis!Share to TwitterShare to FacebookShare to Pinterest
Newer Post Older Post Home