A Virtuoso From Vienna: The Edi Rada Story 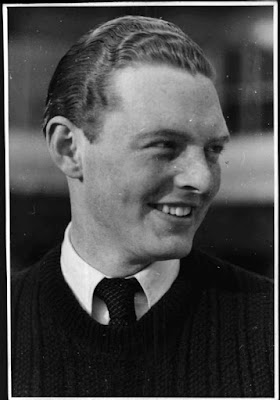 Born September 13, 1922 in Vienna, Austria, Edi Rada first took to the ice at the Engelmann ice rink. By the age of nine, he had caught the eye of Rudolf Kutzer, a prominent Viennese coach who had also discovered a young Karl Schäfer at the age of eleven. Under Kutzer's tutelage, Edi won the juvenile championship of Vienna at the age of eleven, the Hilde Holovsky Memorial Championship at twelve and the Austrian junior men's title at thirteen. By the age of fifteen, he was the runner-up in the Austrian senior men's championship behind World Champion Felix Kaspar and finished seventh at both the 1938 European Championships in St. Moritz and the 1938 World Championships in Berlin. 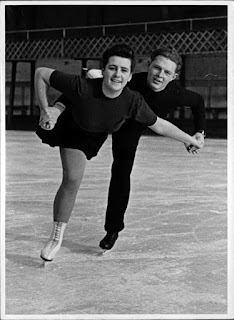 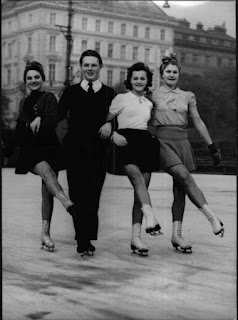 When Felix Kaspar retired, Edi succeeded him as Austrian Champion and placed a strong fourth at both the 1939 European and World Championships behind Henry Graham Sharp, Freddie Tomlins and Horst Faber. With the annexation of Austria into Germany by the Nazis during World War II, Rada reigned as the 'Ostmark' champion through the early war years and even earned a medal for roller skating. During this period, he also won domestic skating competitions in Poland and Switzerland. 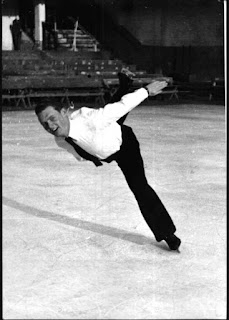 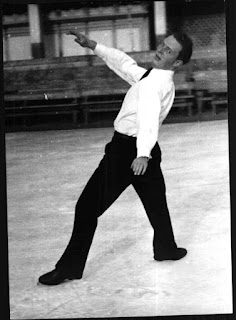 Edi was well known for his excellence in school figures and showed great attack in his free skating performances. In his book "Dick Button On Skates", his rival Dick Button recalled, "His style was wild and frequently forceful in the typically European manner of free skating." During the War, Edi's father made ends by working as a hairdresser. His parents later invested in the laundry business. Edi focused on skating... and it paid off. 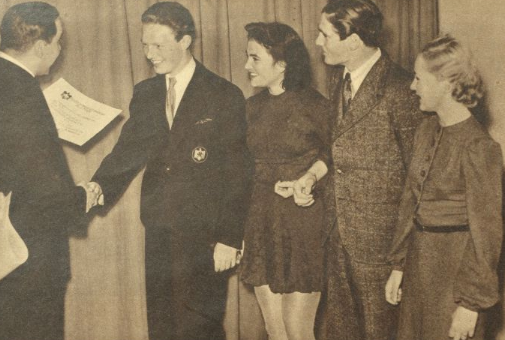 When major international figure skating resumed in 1948, twenty five year old Edi won the bronze medal at both the European Championships and Winter Olympic Games behind Dick Button and Hans Gerschwiler. At the World Championships that followed in Davos, he had ordinals in the school figures that ranged from second to sixth but withdrew after performing one Axel in free skate due to skate problems. 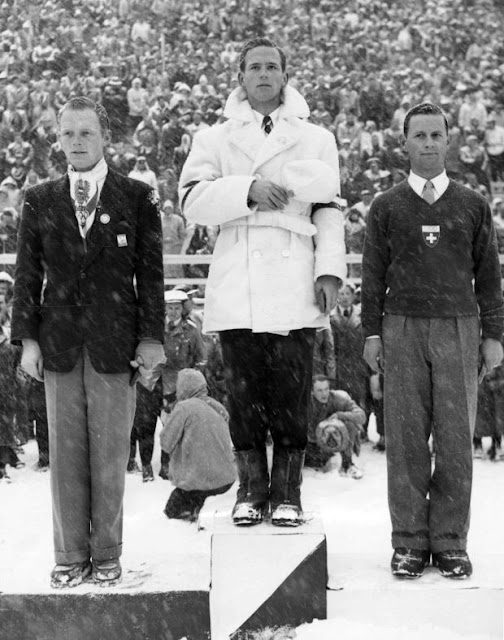 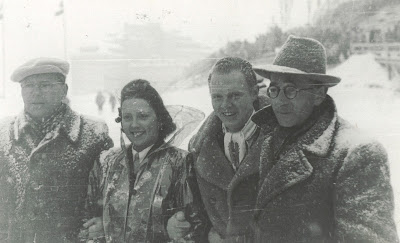 Determined to take one last stab at defeating Dick Button in 1949 following Gerschwiler's retirement, Edi entered the European Championships in Milan, Italy. In the school figures, he defeated Hungary's Ede Király in a three-two split. In free skating, the Hungarian and Austrian judges tied the two skaters, the Norwegian judge gave first place to Király and the Czechoslovakian and Italian judges opted for Rada. The gold medal was his! Unfortunately, at the World Championships that followed in Paris, he narrowly lost the silver medal to Király by one placement point. 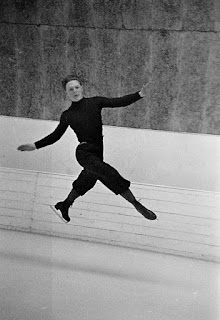 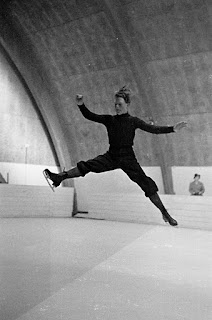 Edi called it a day and turned professional. He toured North America for a year with the Ice Capades and Ice Cycles but found that "show business" wasn't for him. In 1952, he accepted a job coaching at the Hamilton Skating Club in Ontario. After two winters, he was offered a position at the Cricket Club in Toronto but turned it down, instead choosing to head west and accept a position at the Vancouver Skating Club, where he worked from 1953 in 1959. In 1957, he married his lovely wife Beverley Joan (de Groot) Rada, whom I had the pleasure of speaking with in August. "My husband was a very, very good teacher and very dedicated to teaching and very dedicated to putting Vancouver on the map. He loved Vancouver very much," Mrs. Rada explained. 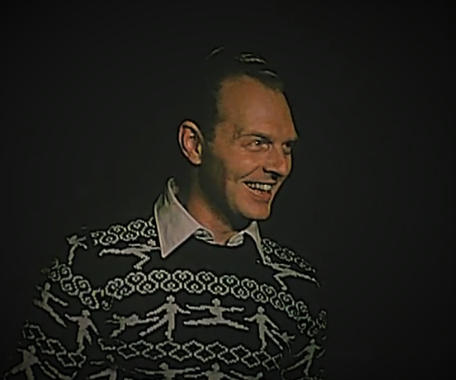 In September 1960, Edi was hired as the first club professional at the newly built North Shore Winter Club in North Vancouver. His students included a who's who of British Columbian greats: Jay Humphry, Betty and John McKilligan, Cathy Lee Irwin, Linda Villella, Gary and Neil Paterson and Karen Magnussen. Quoted in the book "Karen: The Karen Magnussen Story", Edi recalled working with a young Karen thusly: "She had already passed her first test, and was working on her second when she came to me. She was a chubby girl compared to her friend Cathy Lee Irwin, who was sort of skinny. They were both cute youngsters. Both had talent, sure - but at eight years of age, who can tell? Karen was, I suppose, better than anyone else we had at North Shore, except of course, Cathy Lee, Cynthia Titcombe - who was a bit older - and one or two others. But Karen developed very well in the next four years, and at the end of that time there was no question about her potential." At times, Edi - a notoriously tough coach who got results - and Karen's mother butted heads. When he returned to Austria for a holiday in the spring of 1964, Mrs. Magnussen hired Linda Brauckmann to coach her daughter. 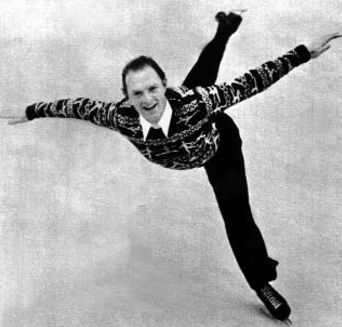 Mrs. Rada acknowledged her husband's reputation. "He was tough," she explained. "He wasn't an easy person to work with. Everything you had to give, he demanded it because he was willing to give it himself. You give and you give back and that's the way it was. Even if at times he was most miserable, I think his students would all agree it didn't matter because they knew he was for them. He was for all of them." In fact, he was even 'for' skaters who weren't his own. One of the skaters he greatly admired was Toller Cranston. Mrs. Rada explained, "Toller Cranston didn't skate with Edi but we were good friends with Toller because he skated with Hellmut May over in Kerrisdale. He was always with Mrs. Burka but when you came to competitions you always had to have a crew and Mrs. Burka wasn't always here and so Dr. May stepped in for her. Toller was just wonderful."

And so was Edi. He was an honorary member of Austrian Figure Skating Association and was declared Sportsman of the Year by the Austrian Marathon Committee. Zdenka Nererová, who requested I do a piece on Edi and so graciously put me in touch with his son Marcel recalled, "I visited him and his family and in Vancouver... He came to see our performance which we gave there in the Queen Elizabeth Theatre. We were on a three very long tours in U.S.A. and Canada with the famous and best ensemble from my country. I was soloist-dancer and dance teacher and assistant of the chief choreographer in it. The name is Lúcnica - Slovak National Folklore Ballet. Mr. Rada was [a] very nice man. Full of life and friendship. I knew very good his mother too. She lived in Vienna. She came very often to see my parents and me to Bratislava. Very nice time. She was a very nice person too." Off the ice, Edi enjoyed all athletics, especially tennis, and took great interest in his student's lives after their competitive days ended. Many of them went on to become elite level coaches themselves. 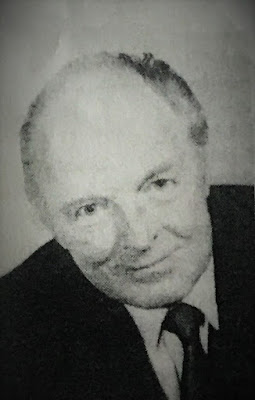 In his late sixties, Edi retired from coaching. "He was very ill," recalled Mrs. Rada. "He wasn't in good health even though he was athletic; a sportsman. I think he was tired. After a while, I think the body wears down... even for an athlete. He had heart problems and then a stroke and then he died." Many years have passed since Edi Rada left this world on July 13, 1997 but Mrs. Rada summarized it best when she said, "Skating was his life. It was his world."

Skate Guard is a blog dedicated to preserving the rich, colourful and fascinating history of figure skating and archives hundreds of compelling features and interviews in a searchable format for readers worldwide. Though there never has been nor will there be a charge for access to these resources, you taking the time to 'like' on the blog's Facebook page at http://www.facebook.com/SkateGuard would be so very much appreciated. Already 'liking'? Consider sharing this feature for others via social media. It would make all the difference in the blog reaching a wider audience. Have a question or comment regarding anything you have read here or have a suggestion for a topic related to figure skating history you would like to see covered? I'd love to hear from you! Learn the many ways you can reach out at http://skateguard1.blogspot.ca/p/contact.html.
Posted by Skate Guard Blog at September 24, 2016
Email ThisBlogThis!Share to TwitterShare to FacebookShare to Pinterest
Newer Post Older Post Home