When you dig through skating history, you never know what you will unearth. In the spirit of cataloguing fascinating tales from skating history, #Unearthed is a once a month 'special occasion' on Skate Guard where fascinating writings by others that are of interest to skating history buffs are excavated, dusted off and shared for your reading pleasure. From forgotten fiction to long lost interviews to tales that have never been shared publicly, each #Unearthed is a fascinating journey through time. Today's edition is an excerpt from a World War II era memoir penned by Gwen Evans, a British skater who toured South Africa in 1937 and taught at Richmond Ice Rink with Arnold Gerschwiler during World War II. Gwen was married to well-known speed skater Jack King and was close friends with Melitta Brunner. Thanks to her son David, we're now able to gain a first-person perspective of what skating was really like in England in the thirties and early forties through this rare primary source.

There must be many skaters today who have happy memories of the Hammersmith Rink which might be said to have been (with the exception of Manchester), one of the pioneers of popular public skating as we know it today.

One day nine years ago, I went by chance to pass a spare hour and became so interested that in three months I had passed my Bronze Figures test. I was particularly fond of dancing, and used to practice a lot with the well known skater Reg Wilkie.

After gaining experience at Hammersmith, I had an offer to join the instructional staff at the rink at Oxford (since closed), and it was there that I met the late Gillis Grafström, the well known Swedish world champion whom I regard as the world's greatest skater ten years ago. He was then practicing for the Olympic Games and Championships but like many of the really good figure skaters of those days he had hitherto paid little attention to ice dances, and we used to practice them together - especially the ten-step on which he was particularly keen.

His association was particularly helpful, and I have always remembered his insistence on the importance of a good style in skating, a point I always try to impress on all my pupils. Since then my skating has taken me to different parts of the world and following one of my seasons in Switzerland, in 1937, I went to the rink at Johannesburg, South Africa. I sailed with a party including Hope [Braine], the professional champion, but on arrival we found that the rink was not ready. So we took the opportunity of touring [Kruger] Park, which is a national game reserve. I remember one occasion when Hope [Braine] had got out of the car and was taking pictures from the roof, when suddenly some lions made toward us. I don't think he ever did his celebrated barrel jumping act quicker than he jumped off the roof of that car, for in one movement he was in the driving seat and we were off in a cloud of dust. We also went down the famous Robinson Deep gold mine which is the deepest in the world, and had a great thrill when the cage dropped suddenly 6000 feet in a few seconds. The South Africans were very keen and made such a good progress that after three months I was able to produce Ice Ballets which proved very popular. 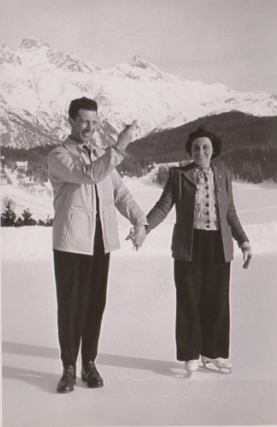 I am one of those fortunate people whose work is also their hobby, and I find a great satisfaction in seeing pupils improve and advance in the art of skating.

Although I enjoy giving exhibitions, I prefer teaching, which I feel is helping to advance the general standard of skating. My own favourite form of skating is pair skating which offers endless opportunities for graceful variations.

When doing exhibitions I always choose and arrange my own music, and prefer a quick waltz time for pair skating and a quick fox-trot for solos. This, of course, is my own particular preference, but when putting a programme together  the music should always be chosen to suit the individual's style. How often does one not see an otherwise good programme marred by the skater trying to force their steps to fit in with music which is too fast or too slow? It is a great mistake to imagine that a fast musical number necessarily means skating at speed, as this depends basically on skating true edges in the correct position and style. No amount of speed gained round the rink will make a feature look graceful if these elements are neglected.

With such a large proportion of ladies on the ice now-a-days I must not omit to say a word on the all important subject of dress. I think there is no doubt that the most practical and economical dress for the ordinary skater is a jumper and flared skirt. This outfit is serviceable and comfortable for general skating and is ideal for hard work when practicing. For exhibition skating, of course, a special dress is necessary which should be 'Chic' while suiting the wearer's personality. It is as well to remember when choosing an exhibition dress that the conditions are similar to those on the stage and that bright colours look the most effective. Soft colours and pastel shades, although very charming for afternoon shows, are apt to look rather flat under artificial light. The most suitable materials to use are Satin, Georgette, or Chiffon Velvet. It is desirable, if possible, to embody the use of sequins, as these are very effective under the spot-lights.

No doubt many readers have taken advantage of the recent great 'Freeze-Up' to skate out of doors. Personally I am afraid I did not join them, as although I normally spend three months of the year in Switzerland, the conditions there are vastly different and it is seldom that we get warm sun and absence of cold winds in this country during a frost. I must confess therefore that in this country I prefer the comfort of an indoor rink.

A busy professional does not get very much spare time, but when I can, I like nothing better than a good gallop across the downs, riding being my chief hobby after skating. I am also (believe it or not), keen on cooking, and prepare most of my own meals. 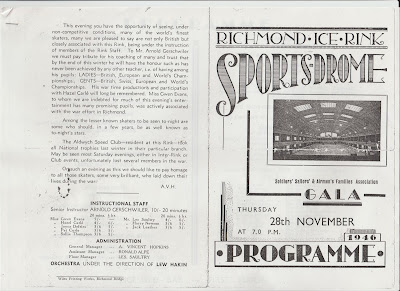 It is a remarkable fact that, contrary to general expectations, the war seems to have made little difference to the attendances at the rinks. In spite of evacuation and the demands of the Services, many people are taking up skating as a convenient recreation during war time. The rink managements are making every effort to meet changed conditions, and have realized that men in the services are now unable to afford the normal charges. Ice Hockey matches and exhibitions are keeping up the public interest, but I would like to make a few suggestions for further popularizing skating.

A very large proportion of skaters cannot afford the charges for instruction, and I would suggest organizing classes somewhat on the lines of (ballroom) dance classes which would also make skating a more sociable pastime. The instructors would still get the same aggregate fees but at a smaller cost to the individual skater. I have found this system works quite well in Switzerland.

In most of the popular rinks quite a large proportion of the skaters are young lads whose chief pleasure is speed skating and who are not at all interested in figure skating or dancing. I suggest therefore, that they should be encouraged by the formation of more speed clubs where they could practice and be trained in this rather neglected side of skating. If this keenness were utilized to the best advantage there could be possibilities of quite exciting matches.

Skate Guard is a blog dedicated to preserving the rich, colourful and fascinating history of figure skating and archives hundreds of compelling features and interviews in a searchable format for readers worldwide. Though there never has been nor will there be a charge for access to these resources, you taking the time to 'like' the blog's Facebook page at http://www.facebook.com/SkateGuard would be so very much appreciated. Already 'liking'? Consider sharing this feature for others via social media. It would make all the difference in the blog reaching a wider audience. Have a question or comment regarding anything you have read here? Have a suggestion for a topic related to figure skating history you would like to see covered? I'd love to hear from you! Learn the many ways you can reach out at http://skateguard1.blogspot.ca/p/contact.html.
Posted by Skate Guard Blog at April 30, 2019
Email ThisBlogThis!Share to TwitterShare to FacebookShare to Pinterest
Newer Post Older Post Home
"As a rule an author has one or two popular ways of contrasting the past with the present. He can treat the past as lying in comparative doleful ignorance, or he can explain that the past was infinitely superior to the day we live in. Of course, either method is the popular journalism of the moment, and in reality there is no sharp contrast, but a gradual transition which leads the past into the present." - Joel B. Liberman, Skating Club Of New York